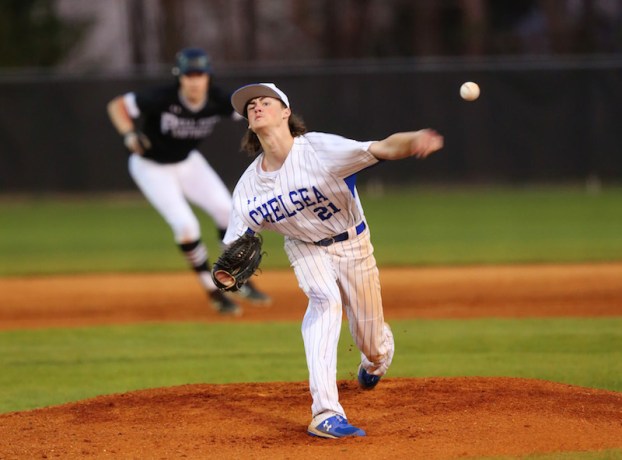 Connor Ball of Chelsea has been named one of three county players to make the 2020 North All-Star team following a strong start to the 2020 season. (For the Reporter/Cari Dean)

For three rising seniors in Shelby County, their 2020 junior seasons were cut short, but luckily they still have one more season ahead of them in 2021, and they’ll go into it as All-Stars.

While the 2020 North-South All-Star week featuring All-Star competitions between the state’s best players in all sports has been canceled for this summer due to the spread of COVID-19, the Alabama High School Athletic Directors and Coaches Association still released all of the teams.

That was no different for baseball and three of Shelby County’s top players earned a spot on the North team for their efforts during a shortened season, as well as what they accomplished in 2019.

Chelsea’s Connor Ball, Briarwood’s Wesley Helms and Helena’s Brody Moss all earned a spot on the team. Ball earned the All-Star nod as a pitcher, while the other two earned infield positions.

“This is an outstanding group of baseball standouts and coaches,” AHSADCA Director Jamie Lee said. “Each player will be receiving certificates from the AHSADCA for their selection to these prestigious squads.”

Ball and Helms were both coming off of state championship appearances during the 2019 season, while Moss was part of a storied Helena program that was looking to get back to a title this season.

Ball followed up a sophomore year in which he went 9-3 overall with a 2.12 ERA and 107 strikeouts, which led the county, by going 4-1 with 49 strikeouts in 28.9 innings pitched this year.

That earned him a spot on the All-County First Team for the second year in a row and has now made him an All-Star.

Helms was a member of the All-County First Team last year as a first baseman thanks to a .457 batting average, which was second in the county, while posting 31 RBIs.

He was off to another strong start this season, and would have likely put together similar numbers had the Lions gotten in a full season that was shortened by the novel coronavirus and rain.

Moss was also named to last year’s All-County team after posting a batting average of .330 with 22 RBIs. He followed that up with an average of .361 through the first 12 games this season with three RBIs and an impressive 11 walks to earn a spot on the All-County team at the shortstop position.

Briarwood head coach Steve Renfroe was also named as one of the North team’s coaches alongside Jay Mitchell of Mars Hill Bible and Keith Lucky of Saint James.