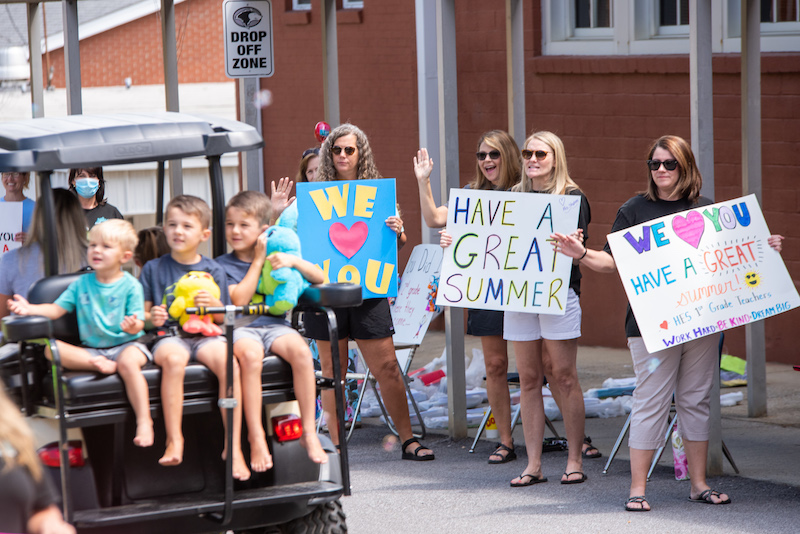 Helena Elementary School saw its staff line the carpool line one final time during the 2019-2020 school year on May 21, to honor all of this year’s students with a drive-by celebration. (File)

HELENA – Teachers and students from Helena Elementary School got to say a proper goodbye to each other when they participated in the “Hip, Hip, Parade” on May 21.

The drive-by parade saw students and their families driving through the carpool line at HES where each child was announced by Principal Jeff Norris, and cheered on by their teachers as they passed by.

The students happily waved back to their teachers who they had spent so much time with and grown to love before in-person classes had to be canceled.

The event also served as a way to congratulate the students on their academic achievement of completing the 2019-2020 school year despite all the challenges that everyone faced.

Since the teachers and students could not physically interact, the teachers dressed up and held signs saying things like “Have a happy summer,” “School is done bring on the fun,” and “We love and miss you.”

The parade was spaced out in two hour increments to allow ample time for kindergarten, first and second grade students to be properly acknowledged.

The parade was especially meaningful for the second graders who will be moving to Helena Intermediate next year, meaning this event would likely be the last time these students and teachers could interact.

As cars finished the route, they were greeted by a big yellow sign set up by the staff that read “Have a great summer, HES love’s our students.”

While not the ending the students expected, it was an opportunity for them and the teachers to have some closure on a difficult end to the school year by coming together one last time.

Students who were not able to participate in this event will have an opportunity at a later time, as the school plans to hold an alternate date for those who could not make it.