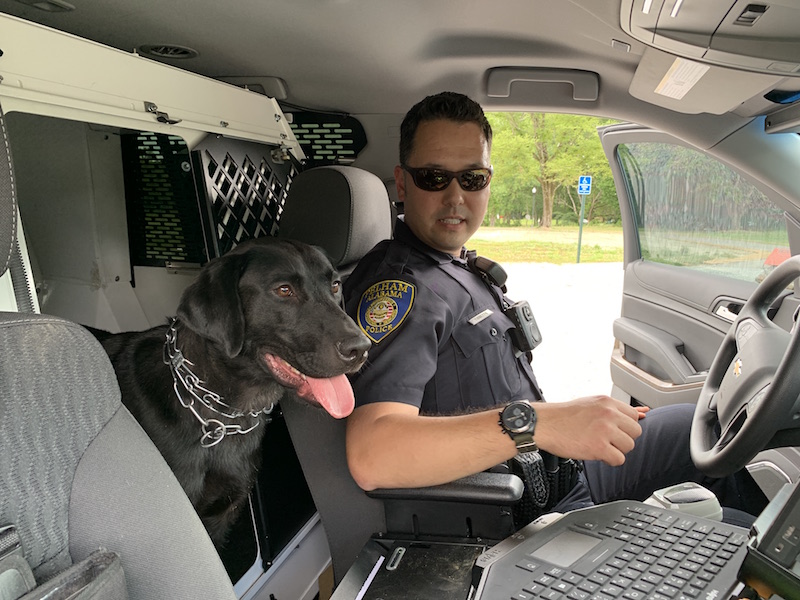 PELHAM – The Pelham Police Department has added a new member to its ranks.

His name is Thunder, and he and his handler, Officer Lee Tibbetts, make up the PPD K-9 Unit’s newest team.

Tibbetts said he and his four-legged partner – a full-bred Labrador retriever – have been working together for two months.

“During our first week of training, when I first met Thunder, I was the new guy and he was the experienced one,” Tibbetts said in a PPD video, adding Thunder trained for five weeks at Alabama Canine in Northport. “It was up to me to catch up to his experience and then us learn together.”

As a new handler, Tibbetts said he has learned much about how to communicate with, care for and work with Thunder as a teammate.

“The first week is a lot of team building and bonding so we get to know each other and learn to trust each other,” Tibbetts said. “That was a new experience for the both of us. We bonded pretty quickly.”

Their bonding consisted of playing fetch, hanging out, and grooming, according to Tibbetts.

Along with games of fetch, Thunder enjoys rolling around in mud puddles and eating.

“If I try to eat anything in the car while I’m at work, I have to give him some of it,” Tibbetts said. “Some of his favorite things are French fries from McDonald’s and pup cups from Starbucks.”

Thunder lives with Tibbetts and his family members, who have welcomed Thunder with open arms.

“The kids all get involved with the care of Thunder, and he gets along with everybody, including our own dogs,” Tibbetts said.

He and Thunder are on-call 24 hours a day in case of a reported bomb threat or suspicious package.

Thunder is trained in detecting more than a dozen different explosive odors. He can differentiate smells and combinations of odors.

“That should prove to be a really valuable asset to us in protecting our city in a new way when it comes to larger events such as concerts at the Oak Mountain Amphitheater, hockey games at the civic complex, high school football games and any large gathering or special event in the city,” Tibbetts said.

Tibbetts has served as a patrol officer in Pelham for nearly seven years, and he will continue to carry out his regular duties, such as checking on neighborhoods and businesses, conducting traffic stops and investigating calls for service.

The only difference is he has a new sidekick with him.

Thunder rides in his own kennel in Tibbetts’s police vehicle, but it’s not uncommon for Tibbetts to leave the door of the kennel open and feel Thunder’s chin on his shoulder while he is driving.

“He’s really good in the car,” Tibbetts said. “I just have to remember to close the divider between us if I get out of the car, or else he’ll end up in the driver’s seat.”