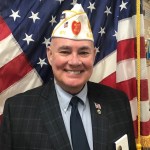 As an only child, he recalled, “There were not a lot of multi-children families.”

That all changed when the family moved to Gardendale.

“There were a lot of multi-children families where we lived in Gardendale, about a zillion,” Bradstreet said. “It was great! It was a great place for an only child to grow up.”

Bradstreet’s mother was a stay-at-home mom, and his father was employed as a mechanic at Excello for 20 years.

In 1977, Bradstreet earned a bachelor’s degree in criminal justice from Rollins College in Winter Park, Florida.

In 1993, he graduated from Troy University in Ft. Benning, Georgia, where he earned his master’s degree in human resources management.

Ron married his wife, Vanessa, in 1984. The couple met while Ron was working at Ft. McClellan Military Police School, where Vanessa was a secretary.

Ron and Vanessa will celebrate their 36th wedding anniversary this November.

They have one son.

“They say married men live longer,” Bradstreet said of his decision to marry. “It’s good to be in a loving relationship where you know someone’s got your back, and you have theirs.”

The Bradstreets credit their understanding of the significance of one another’s hobbies as one of the keys to a successful relationship.

He added the importance of having shared goals concerning lifestyle, finances, family and the future.

Following in the footsteps of his two best friends, Ron enlisted in the United States Army after graduating high school in 1967.

He served two tours in Vietnam. He worked as a tele-type operator and spent over 20 years in active duty.

“I liked the chance to travel that the military gave me,” he said. “I worked with ‘can do attitude’ people who were interesting to work with. They were dedicated. I loved being a soldier and loved my soldiers.”

Discharged from the Army in 1971, Ron enjoyed four-and-a-half years in civilian law enforcement.

He was employed with the Volusia County Sheriff’s Department as a deputy sheriff.

Ron said he enjoyed the investigative aspect of the position, and it was a good feeling to be able to “catch the bad guys.”

“The people were great to work with,” he added.

After military retirement in 1994, Ron became a U.S. Army Jr. ROTC instructor until 2014. Due to his interest and experience in teaching, he became a substitute school teacher until 2016.

Ron became a member of the American Legion Post 347 in Fairfield in 2003.

For two years he was 21st District Commander for Jefferson County which consist of 18 posts total.

Ron ran for state office and was elected senior vice commander for Department of Alabama American Legion, in which he served for a year.

“I’m responsible for everything,” he said, laughing. “Membership, programs, I travel all over the state visiting posts. I enjoy traveling and connecting with the people, the Legionnaires, the American Legion family and all of the great programs the American Legion has. The best part is being able to help veterans and their families.”

In addition to an active role in the Legion, Ron also supports additional military organizations with his membership; they include the Support Committee for the Alabama National Cemetery, Veteran of Foreign Wars, Military Officers Association of America, Blue Star Salute, Vietnam Veterans of America and associate member of Marine Corps League.

Ron’s hobbies and interests outside of his busy American Legion schedule include walking and riding his stationary bicycle.

He and Vanessa manage to make time to travel together.

They are committed to seeing every covered bridge and waterfall in the state.

One of their favorite spots is Lake Catoma and Larkwood Falls in Cullman.

They enjoy anything having to do with history.