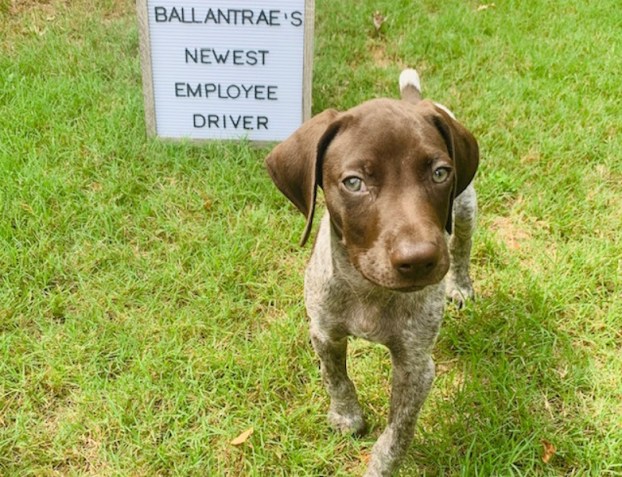 This 8-week-old German Shorthaired Pointer named Driver is one of the newest employees at Ballantrae Golf Club. (Contributed)

By BRIANA H. WILSON | Special to the Reporter

The pup was recruited to help with a pesky problem at the golf course – geese.

“We’ve tried decoys, sprays, ropes, sirens and lasers that are not harmful, but nothing has worked,” said Ballantrae General Manager Hal Brown. “This is the only other humane way to address our geese problem effectively.”

The geese that call Ballantrae home are a nuisance, according to Brown. They defecate on the greens and eat and peck holes in the grass.

“Our maintenance team is having to clean up feces on a very regular basis, which is a safety concern because geese are known to carry diseases,” Brown said. “They’ve gotten so comfortable that they’re in the way of the golfers. Thankfully we haven’t had any issues with geese getting aggressive with people.”

Brown said Ballantrae has been spending an average of $10,000 annually to fix problems caused by its geese population. Right now, he says 20 to 30 geese live on the course and 21 babies were born this spring.

Brown said Driver’s job at the golf course will be to chase away the geese to help keep them from settling on the course. Over time, the geese will find another place to call home.

The cost of purchasing and training Driver, a bird dog by nature, amounts to about a third of the cost to clean up behind the geese, Brown said.

Before Driver starts his new job, he’ll complete four to six weeks of obedience training and participate in bird training. Brown said he won’t be trained to attack or hurt the geese. He will be ready to hit the greens by the time he’s 6-8 months old.

“We’re excited for everyone to meet and get to know Driver,” Brown said. “He will be a part of the family, interacting with our staff and customers for years to come.”

By NATHAN HOWELL | Special to the Reporter HELENA – Helena Hollow will be holding a special summer festival event... read more