Ferguson used to excelling in the face of adversity

“The teachers and coaches at Briarwood provided a supportive environment where I could strive to achieve in all fields,” Ferguson said. “Playing in the football and baseball state championships provided me with experiences that I will never forget. I also loved every second spent with all of my friends, whether that was the football, baseball or math team.”

Ferguson was named valedictorian for the class of 2020; he was voted by his teammates to be a captain on the 2020 football and baseball teams; he served in the Student Government Association all four years of high school, and was voted the chaplain of the school by his classmates. He was also voted the National Honor Society president, scored a perfect 5 on his AP chemistry exam; was the Bryant Jordan Scholar Athlete Regional winner; voted “most well-rounded” by his classmates, and was the Matt Johnson Courage Award winner.

When Ferguson was 5 years old, his older brother passed away in an accident in his backyard. 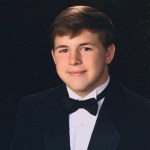 “He was two years older than me, and my best friend,” Ferguson said. “That night, my dad sat my family down and said, ‘A lot of families crumble when they face struggle, but we will not let this define us.’ As I have grown up, I remember to fight through all forms of adversity. I have learned that when you wallow in sadness, the adversity will have a negative impact on your life, but when you fight through it, you can use adversity as a tool to help you achieve your goals.”

Since senior year was cut short due to the Covid-19 outbreak, Ferguson said not getting to spend his last couple of months at school has been difficult.

“We had an incredibly talented baseball team, and we were looking for revenge after losing in the state championship last year,” Ferguson said. “But I have gotten to spend some great time with my family before I leave for college. It is also encouraging to see how the Briarwood staff is supporting all of the seniors. School staff members visited all 143 seniors at their homes, and delivered graduation party packs.”

Ferguson said he will take the memory of the atmosphere during a home Briarwood football game with him.

“The fans, the band, the student section, the coaches and my teammates all banded together to support the eleven guys on the field, it was incredible,” he said.

Ferguson loves all things science and math, because he can see how they relate to one another and have practical real world applications.

If he had to pick a favorite subject, he would choose chemistry.

Ferguson plans to attend the University of Alabama on one of the school’s seven Academic Elite Scholarships.

He will be majoring in chemical engineering and minoring in social innovation and leadership.

He has been selected to take part in the University Fellows Experience, which is a service-based fellowship that serves impoverished communities across the state.

“I can’t wait to spend the next four years pushing myself to become a better person for the Tuscaloosa community, and the state of Alabama,” Ferguson said.

Ferguson is the son of Juli and Scott Ferguson. He is the brother of Sara and Anna Grace Ferguson.

CHELSEA – The members of Chelsea High School’s 2020 class marked the end of one chapter and the beginning of... read more