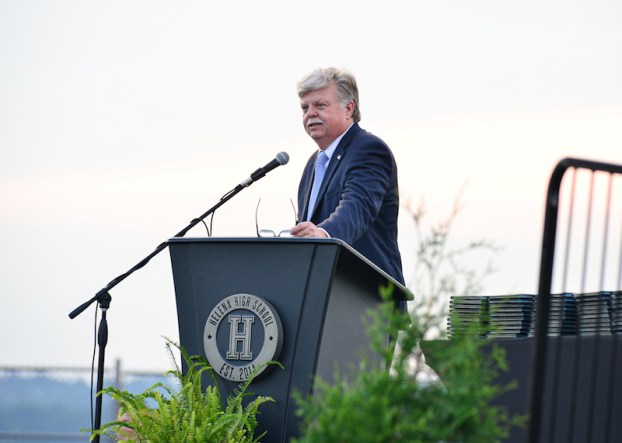 Current Helena Mayor Mark Hall won’t seek a third term after serving as the city’s mayor for the last eight years. (For the Reporter/Jeremy Raines)

HELENA – After serving two terms as the mayor of Helena, Mark Hall announced on Thursday, June 4, that he won’t be seeking a third term as the city’s mayor.

“As the municipal election July qualifying period approaches for the August municipal elections, I feel it is necessary to publicly announce that I will not be seeking a third term as the mayor of the city of Helena,” he wrote in a Facebook post before adding you may not have seen the last of him. “Who knows, while I promised to serve only two terms as mayor, you never know where or when you might see me again in another role.”

He noted that he wanted to keep his promise to the residents of Helena that he would only serve two terms because often times politicians lose the public trust by going against important promises.

“I want to thank each one of you for helping me keep and make Helena a safe and great place to live, work and play,” he said. “I am very proud of the many accomplishments and improvements we have made together, and I have been very fortunate to have a City Council that approved many of the improvements and funding requests for the projects and yearly budget additions that I presented to them during my time of service.”

In his time as the mayor of Helena, Hall along with the help of the council, accomplished several major tasks, including the upgrades to athletic facilities and fields at Helena High School and additional funding the city was able to give to the schools in Helena.

“I know that great schools make great communities, so contributing much needed extra funds to the Shelby County Schools located in Helena has always been a top priority,” he said. “To date we have provided over $9 million to school related projects.”

In addition to that, business in Helena has also started to flourish with several projects in the works including several new retail developments that will help with tax revenue.

Hall also mentioned the road construction that has already been accomplished and what is in store for the future, while bringing up the Wastewater Treatment Plant project that helped save the taxpayers of Helena approximately $12 million.

He added that the city will be receiving a future grant from the U.S. Department of Justice COPS program for $500,000 to go toward hiring several new police officers during the coming budget year, which will help with funds for others like the fire department.

“This grant will fill a critical need to help police continue to provide great service as our city continues to see growth,” Hall said. “I have always worked closely with our public safety staff to manage and help mitigate emergency events successfully, from a nearby pipeline explosion, to catastrophic road failures, weather related damages, fires, and other related incidents.”

Hall said he is extremely proud of how he and the city’s employees have worked over the last eight years to help not only keep the way of living in Helena great, but also improve it and help the city move into the future at the right pace.

“I will continue to work hard until a replacement is elected and takes office this November,” Hall said. I must keep my promise and prepare to move on to the next challenge, whatever that may be.

“It is, and has been, an honor to serve for the last eight years. I have tried my best to do what is right and totally understand that many will disagree with some of those decisions, and I embrace those opinions. After all, that’s why we have and enjoy freedom of speech and expression that we have and hold so important.”

By ALEC ETHEREDGE | Managing Editor PELHAM – After a successful seven-year stint at Montevallo that saw him pick up... read more