Helena’s Tilton preparing for the next chapter

Many of Elijah Tilton’s favorite memories from his time at Helena High School involve the school’s theatre department. 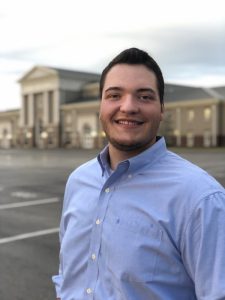 “I have been very involved both onstage and backstage since my freshman year,” Tilton said. “Our most recent production, ‘Footloose,’ was my favorite, even though it did get cut short due to the Covid-19 pandemic. I was cast in the role of Willard Hewitt, who was probably my favorite character to portray. I also was the technical director and scene designer for the production. The atmosphere in the theater department is quirky and accepting and it was a place where I always felt at home.”

Tilton said he really enjoys the subject of calculus because many of the problems are like puzzles and he likes to solve them.

“Calculus requires you to use many parts of math that you have learned through the years,” Tilton said. “Some problems may be complex, but the harder they are, the bigger the payoff when you get the right answer.”

Due to Tilton’s senior year being cut short thanks to the Covid-19 outbreak, he describes the ending to his senior year as “anticlimactic.”

“We were all looking forward to milestone events that occur during the peak of senior year like banquets, senior prom, awards day, and graduation,” Tilton said. “Events were canceled and the graduation announcement came in an email. Twelve years of school ended in an instant, rather than over two or three months like we expected. Once it was confirmed that we would not be returning, I decided to keep myself busy by working for a landscaper. The work keeps me outside and active, while I prepare for the next chapter.”

Tilton said he will take the memory of his last day of high school on March 12 with him as moves forward to the next chapter of his life.

“It was the opening night of ‘Footloose,’ and we were all excited,” Tilton said. “The show really came together for that first performance and we all left that night feeling proud of ourselves. Over the next few days, we learned that that was our last day of school for the year. This is not how any of us thought senior year would end at Helena, but for myself and my fellow seniors in the cast, crew, and orchestra, we were fortunate to end our year on a high note.”

Tilton’s future plans are to attend Auburn University where he will study mechanical engineering.

Tilton is the son of Dana and Jesse Tilton.

By CINDY WARNER / Special to the Reporter As news broke that schools would close for the remainder of the... read more