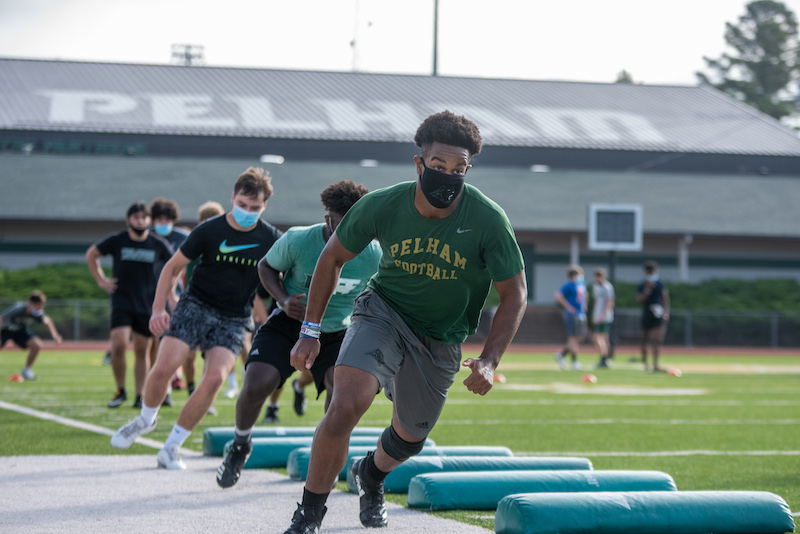 The Pelham football team returned for voluntary summer workouts on Monday, June 1, marking the first time they were together as a team since March 13. (Reporter photo/Keith McCoy)

PELHAM – It normally would have been one of the more boring days of practice for the Pelham Panthers as the football team flooded into the practice facility on the first day of June.

But after almost three months of no conditioning, practice or workouts due to COVID-19 abruptly cancelling all activities, their first moments together turned an otherwise boring day of physicals and conditioning into a reunion full of excitement.

“The only thing I hated about today was having to wear that mask. The kids couldn’t see that big smile on my face,” head coach Tom Causey said.  “It was really good to see our guys again. It’s so much better to see them face to face than having to schedule google meets.”

Other than just seeing the kids in person for the first time since March 13, Causey couldn’t believe the number of players that showed up, saying more than 70 were there and that no seniors missed the day.

“I was kind of surprised to be honest with you,” Causey said following the first day of workouts. “The system let us know last week we could go June 1. I was expecting to have low numbers because of the short notice and the whole COVID thing, but our numbers were really good this morning.”

All of them were there for voluntary workouts and conditioning, and each had to go through extensive precautions while in attendance.

Causey said the staff and players were probably over precautious, but he would rather do that than something happen and them be forced not to be together again.

He said there were designated drop off and pick up areas, players wore masks, especially when closer than 6 feet apart, temperatures of each player were checked, hand sanitizer was located throughout the facility and stadium, equipment was cleaned after each person worked with weights.

But the precaution was well worth being able to get the players back together.

“We need to make sure they are safe,” Causey said. “I’ll do anything I need to in order to see them right now.”

Causey said it was a slow start and that some of the players who have been on top of workouts and conditioning at home were probably bored, but that they needed to “crawl before they walk.”

“We’re blessed to be back this week because it gives us eight weeks to get in shape for practice,” Causey said. “We just have to start slow as far as conditioning and on field stuff. We’re also going light in the weight room right now with high reps. We don’t want to get them so dang sore they can’t get out of bed. Have to build them up not wear them down.”

Teams across the state also get an extra week of fall practice this year, starting July 27 instead of Aug. 3 after all of spring practice and 7-on-7 and OTA competitions were canceled for the summer.

With that new start date to fall practice, Causey said he plans to have the team go slow and see where they are over the next week or two, then really start going more full force in July. He added that it may be more individualized for a few weeks as different players may be ahead of others.

“We’re going to have to be patient, which is why it’s key that we started now,” Causey said. “We’ve got more time to be patient with them. If we find out in a week-and-a-half that they’re doing what we need to do, we can speed it up. It may be different for different groups that have done more work while away, but the main message right now is to simplify and go slow.”

While the Panthers will be taking it slow for now, the buildup for the season is already seeing plenty of excitement after the players saw seasons cut short this past spring for other athletes. Now, they know it can be taken away at any moment.

“We tell them every day to work their tails off because they don’t know when it will be taken away from them,” Causey said. “That’s a motivational ploy that we normally used, but now actually had to live.

“We take for granted being able to see them. I know just about every coach out there was just excited about seeing their guys again today. We tell our kids we love them, but I’ll never take for granted that I get to see them again tomorrow. We get so busy and wrapped up in routine, you take those things for granted. That’s what this has taught us. You can’t take it for granted.”

After a 0-6 start last year, Pelham was able to win three of its last four games, all three in a row, to end the season with some confidence with a very young team.

Now, they’ll be replacing a couple of key contributors but return the majority of their best players this season, which has the excitement building.

That combined with the hunger to compete, should make it a compelling season for the Pelham Panthers.

“Seeing spring sports taken away really opened up eyes for this year’s seniors that they have to get the most out of it because you literally don’t know if it’s going to end today,” Causey said. “It was a great lesson learned for anybody and I can’t wait to see what it does for their competitiveness.”