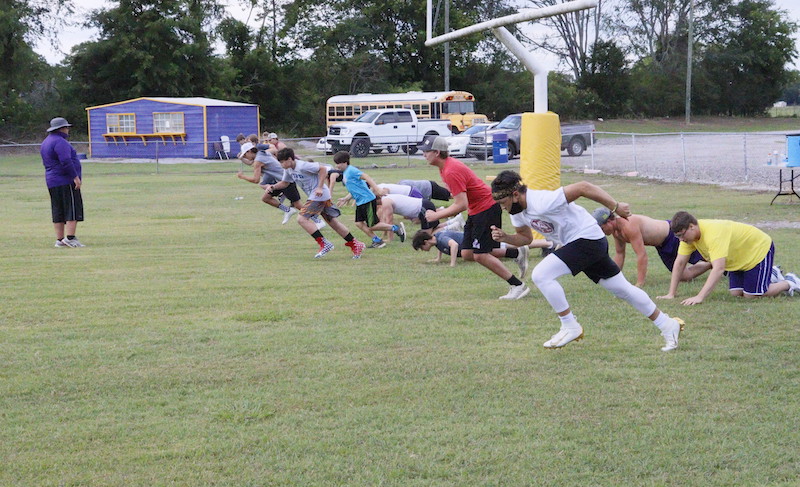 The Cornerstone Chargers returned for summer workouts during the week of June 1, marking the first time they were allowed together as a team in nearly three months. (Contributed/Sam Adams)

By SAM ADAMS | Special to the Reporter

COLUMBIANA – There is excitement all around each and every high school as summer workouts begin, the same is true for the Cornerstone Chargers as they too began their summer program the week of June 1 after a long hiatus.

The Chargers, like all other schools across the state, were forced to stop all activities back on March 13 due to the spread of COVID-19, but the week of June 1 marked the first time in nearly three months that athletes were allowed back on campuses, and it was an exciting moment.

“I feel like my heart is finally beating again after being dead for three months” Cornerstone head coach James Lee said.

Many schools were closed immediately and many high school football programs missed out on spring training, which caused a growing concern as to when many would step back out onto the field.

With stipulations and regulations set up, Lee said he and his coaching staff are doing all they can to provide a safe environment for all players during this time by taking the measures put in place by the AISA for safety.

But with a shorter time frame to prepare for the upcoming season, the Chargers and Lee are having to adjust.

“We have to get mentally tough and physically ready,” he said. “Many of these guys have been playing on varsity since seventh and eitght grade, now they are juniors and seniors… it’s their time.”

The coaches are ready and the players are ready for work as the excitement of the season looms once again.

Junior Justus Adams, who will be a team leader voiced his excitement and what it means to he and his teammates to be back to work.

“It feels great. I love the atmosphere and attitude everyone has brought,” Adams said. “We all know what is going on in the world right now but it hasn’t discouraged the team from working hard and banding together. It’s awesome to have my second family back.”

Those remarks were echoed by rising-senior team captain Lane Bailey.

“It’s great to see all my brothers,” he said. “I’ve missed the field and the guys.  We have a lot of work to do, but we are all up for it and ready. We plan to be back and better than ever.”

With all that is going on in the world today, we know many around the state have that same feeling and are excited to get back to a little piece of normal…to be together as a team and a family.

Cornerstone is scheduled to begin its season at home on Aug. 28 agaisnt Banks Academy.