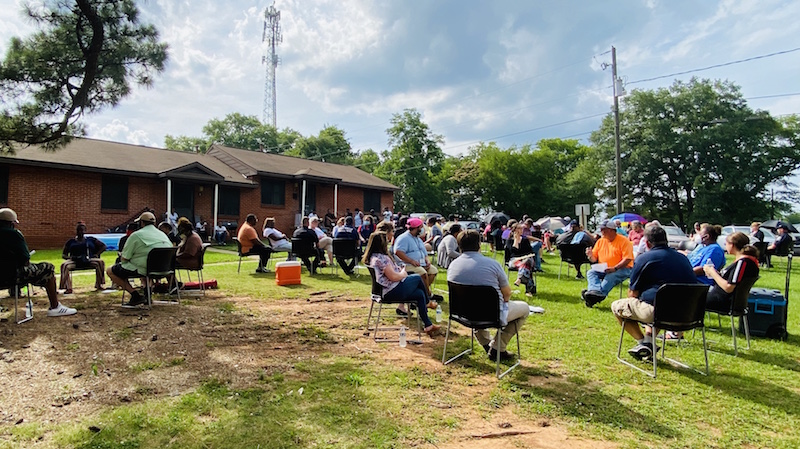 Montevallo city leaders and residents attend a community meeting at the Scott Village housing development on Tuesday, June 2, to share concerns and ideas in the wake of fatal shootings in the city. (Contributed)

Montevallo resident Veronica Peoples said she organized the meeting in hopes of facilitating an open conversation among community members following a string of shootings in the city in the last six months.

Peoples said she and Mayor Hollie Cost talked about the situation and how to carry out Peoples’s idea of holding a public meeting under social distancing guidelines.

Planning for the meeting started before George Floyd’s death in police custody in Minneapolis, Minn. on May 25, but the incident surfaced in discussions at the meeting, Peoples said.

“What started as a community conversation to memorialize Tank, a young black man whose life was lost to gun violence, progressed into an event to honor not only his life, but also the life of George Floyd and so many other black lives that have been taken throughout the years,” Cost wrote in a June 4 Facebook post. “Those present shared personal trials and tribulations as well as ideas to advance social justice and racial equity throughout Montevallo.”

In addition to Cost, City Council members Jason Peterson and Rusty Nix, Police Chief Jeremy Littleton and Fire Chief Brad Davis attended the meeting, along with at least four church pastors and dozens of residents from different areas throughout the city.

After individual group discussions ended, representatives from each group stood up and shared the main ideas that emerged during their conversations.

“The recurring theme in all the groups is that we are a united community, willing to help one another,” Peoples said, adding another common theme was the need to hold public meetings more often to address community issues. “Everyone was able to express their feelings and their concerns. Everyone respected each other’s opinion. There was open dialogue between everyone.”

Peoples and Cost said their sons have been best friends with each other since the third grade.

“We are both fiercely protective of our sons. But, I most definitely acknowledge that my fears for my white sons are no match for the fear she (Peoples) and other mothers of black sons will have until the day they draw their last breath,” Cost wrote. “While we hear responses that ‘all lives matter,’ the lives of the greatest focus, love and support right now are most definitely ‘black lives.’ Black lives matter in Montevallo. We acknowledged that we are not a perfect community. Racism exists here, but it is the exception, not the norm.”

Cost said Montevallo’s police officers stand beside her in the position that “all citizens deserve to be treated equally, with respect and with full protection.”

“Our police officers truly, deeply love and support this community and are absolutely committed to serving and protecting,” she wrote.

Cost described Montevallo as a racially, ethnically and politically diverse community, and said the June 2 meeting was another step in an ongoing process to resolve issues and strengthen ties.

“We’ve already done so much work before that meeting,” Cost said. “We do have these true relationships. This isn’t the end, and this dialogue is very important.”

“I’m incredibly proud of the way that our community works together to address issues and that we choose to speak with each other and not at each other,” Cost said. “We have a lot we need to work on, but we are all very willing to work together, and we have a sense of openness. I think that’s critical.”

UM alumna named to list of Most Influential Black…