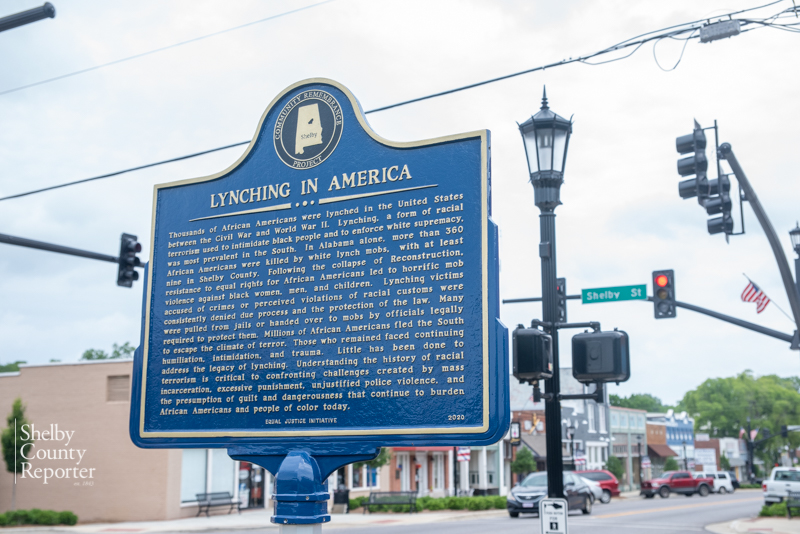 An Equal Justice Initiative historical marker was installed at the corner of Main and Shelby streets in Montevallo on June 8. (Reporter Photo/Keith McCoy)

MONTEVALLO – An Equal Justice Initiative historical marker approved by the Montevallo City Council in August was installed at the corner of Main and Shelby streets on Monday, June 8.

A dedication ceremony for the marker previously scheduled for April 2 had to be canceled amid the COVID-19 pandemic, but leaders of the Montevallo Community Remembrance Project are inviting residents to visit the site in small, socially distanced groups.

The marker recognizes two African American men who were lynched in Montevallo in 1889.

“As many of you know, this marker represents a partnership between the city of Montevallo and the Montgomery-based Equal Justice Initiative,” read an email from the Montevallo CRP coalition coleaders Kathy King, Paul Mahaffey and Sierra Turner. “A coalition of citizens and allies throughout Shelby County, including the local chapter of the NAACP, began working to bring a marker to town shortly after the opening of the National Memorial for Peace and Justice in Montgomery. With installation of this marker Montevallo proudly takes its place in a national movement to confront our country’s history of racial terrorism and joins the many others now stepping forward to undo the all-too-obvious effects of a culture of racism and white supremacy.”

Residents have voiced different opinions about the marker since discussions started more than a year ago, prior to the council’s decision in August. Proponents of the marker suggest it provides a point of remembrance and healing for the city, while those against it have cited concerns about the information displayed on it and whether the marker will create more pain than progress.

The Montevallo CRP coalition is in the process of setting up Facebook and Instagram pages for residents to use for sharing pictures and short reflections as they visit the marker.

A community Google site is also in the works. Those who want to share resources, such as articles, books, documentaries and original pieces (e.g. poems, short stories or images) may send them to montevallocrp@gmail.com.