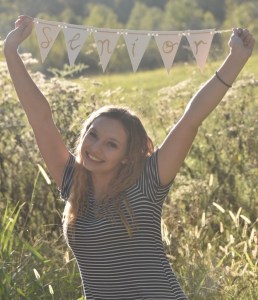 In addition to her academic achievements, Vincent Middle High School valedictorian Paisley Armstrong has been involved with campus groups, band and athletics. (Contributed)

“I have enjoyed close-knit friendships, caring teachers, a community that comes together to help the school and the opportunity to know each and every one of my classmates,” Armstrong said. “Vincent is a second home to many students, and it gives us a place to get away but also have our minds enriched.”

Armstrong’s accomplishment as the student with the highest academic achievement in the 2020 graduating class speaks volumes about her enriched mind and balanced engagement in her high school career, playing softball for seven years in her youth to volleyball in the seventh and 10th grades.

A review of her achievements shows, Armstrong emerges as a leader consistently.

She has been involved in student government for three years and served as reporter and secretary.

She was a member of the Senior Beta Club for four years, serving as treasurer her senior year.

Her engagement in extracurricular activities is impressive, as she also served on the yearbook team for two years, Peer Helpers for two years, and the time-intensive dedication of five years as part of the VMHS Marching Band, achieving leadership titles that included Clarinet Section Leader and Field Captain—all while achieving a 4.4 GPA.

It is a tradition at VMHS that the top 10 academic achievement students are afforded the opportunity to recognize a teacher, staff or faculty member who has made the most impact on their lives with what is called the “Golden Stinger Award.”

While the COVID-19 pandemic caused the annual awards ceremony to be cancelled, Armstrong awarded her Golden Stinger Award to VMHS band director Landon Manning during her valedictorian speech on Tuesday, June 2, at the graduation ceremony.

“I give my Golden Stinger to Mr. Manning,” Armstrong said. “I choose Mr. Manning because he always stood by me through the dark times in my life.”

Describing Manning as counselor, teacher and “one of my best friends at this school,” Armstrong added, “After my dad passed, Mr. Manning gave me a shoulder to cry on and a listening ear. Thank you for treating me like your daughter.”

When asked about the impacts of the pandemic on her senior year, Armstrong voiced a strong opinion.

“We have been robbed,” she said. “We lost the last season of spring sports, Senior Skip Day, signing each other’s yearbooks and Awards Day, where our hard work is recognized.”

While Armstrong’s senior year at VMHS was wrought with disappointment, she also has much to smile about.

Her future is bright. Her road to valedictorian has been dotted with accolades, including A-Honor Roll, AB-Honor Roll, Daughters of the Revolution Award (8th Grade), and graduating with the highest average in chemistry, pre-calculus, AP calculus and honors economics.

Her stellar academic journey has been rewarded.  Paisley plans to attend the University of Alabama in Birmingham on a Collegiate Honors Scholarship totally $32,000 over four years; ending her high school career, Vincent Strong!