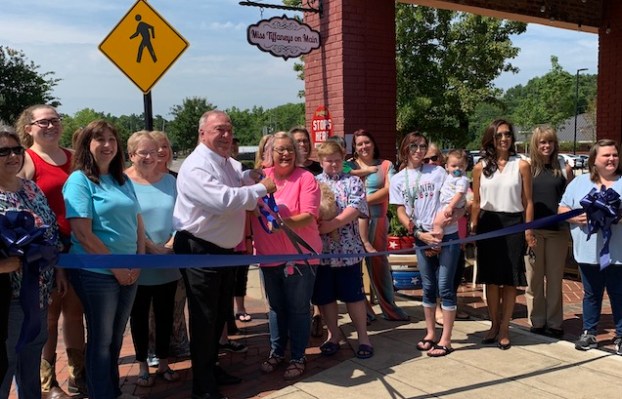 Tiffaney Anderson and Mayor Stancil Handley cut the ribbon for the first store opening in Shelby County since the March COVID-19 shutdown. (Contributed)

Tiffaney Anderson has deep roots in the Shelby/Columbiana area, though she herself has only lived here off and on over the years. She’ll tell you though, that this is home, and she’s glad to be finally settled back where her family started when she was a child.

After living in Florida in the wake of her parents passing in 2015, she decided to come home one last time in August of 2019. She settled in, started back to school to further her career, and then, as the rest of us did, she felt the force of the COVID-19 shut down.

Anderson, a nurse by profession, needed a way to help and immediately went into action by creating Columbiana Cares, which started out as a Facebook group that was started in order to give the community a hands-on way to meet the needs of their neighbors in the area.

Neighbors were using the group to make sure everyone had food, masks, and other needs that arose. Neighbors that needed help with getting their grass cut, to feeding their pets were seeing people in their community rise to the occasion to assist.

The group began to raise funds to meet the community’s vast array of needs through online sales of items donated by local artists and business owners. As the “shelter in place” guidelines for Alabama began to lift, Anderson and her team began to think bigger.

“Many of the artists that were donating for our online sales were losing their main jobs, and suddenly their side-hustles became their main income,” she told us. “We began to think that if we opened a store to help them too, then we’d be helping on multiple levels.”

And that was how the idea for Miss Tiffaney’s on Main began. The gift shop has become a place for local artists and entrepreneurs to showcase and sell their products. Columbiana Cares benefits through a portion of their booth fees and sales similar to a consignment module.

On June 2, The Shelby Chamber held a ribbon-cutting for Miss Tiffaney’s. After weeks of news about the struggles that local businesses have been facing, the opening of a new business in the heart of the county seat that helps many has been a sign of hope for people in the area. It was the first ribbon-cutting since the pandemic shut down.

Miss Tiffaney’s is also located at a site that comes with a great deal of county history as well. They are in the corner building on Main Street just across from the old courthouse. Columbiana Mayor Stancil Handly spoke briefly to that history at the ribbon cutting. Much of that history is being preserved throughout Anderson’s shop for locals to see up close thanks to local donations and one of her partners and business owners, framer Linda Cook, who was able to move her 30-year business Busy Hands Framing and Gifts to a section of Miss Tiffaney’s on Main.

Sasha Johns is a community columnist who writes about Columbiana.

By NATHAN HOWELL | Special to the Reporter PELHAM – For his Eagle Scout project, Shawn Winn spent a considerable... read more