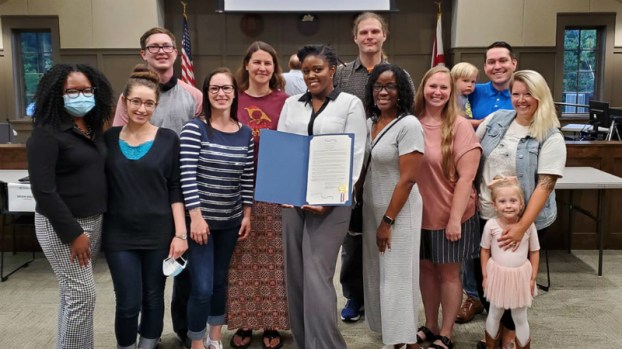 ALABASTER – A Juneteenth Festival and Black Lives Matter Unity March and Rally are scheduled for Saturday, June 20, in Alabaster.

The Festival will be held from 2-4 p.m. in the area surrounding the Alabaster Municipal Complex, at 1953 Municipal Way, featuring a DJ, food trucks, speakers, an open mic and a youth spoken word and poster contest.

The unity march and rally will immediately follow at 4 p.m., with plans to transport participants from the festival to the Alabaster First United Methodist Church’s Restore building, where the march will begin.

The march will conclude back at the Municipal Complex.

The Juneteenth Festival is part of an effort by local activists to make a difference for diversity and equality in Alabaster, according to April Dortch, who is among the event organizers.

A rally at Veterans Park on Saturday, June 6, turned into somewhat of a town hall with Mayor Marty Handlon, who was present and addressed concerns raised by protestors.

“We felt like coming together as a group of people would be a lot more impactful—to not just have problems but have solutions,” Dortch said.

More conversations with Handlon ensued, and the idea to hold a Juneteenth celebration was developed.

“I encourage all citizens to observe Juneteenth as an opportunity to reflect, rejoice and plan for a brighter future as we continue to address racial injustices in our society today,” the proclamation read.

City Council members discussed with those in attendance about opportunities for serving on volunteer boards, and work is also underway to create a community council that could offer recommendations to city leadership on areas of concern. Alabaster officials said at the Council meeting they would look into how the entity would need to be created.

“There’s a lot more to come; we’re just trying to get through Juneteenth,” Dortch said about future plans.

A meeting place for updates about the group’s progress can be found at the “Change! Alabaster” Facebook page.

The festival and rally are not city of Alabaster events. Donations of water and sanitizer would be appreciated, and any local business interested in giving support through sponsorships can contact the Change! Alabaster page.

Those interested in participating in the spoken word and youth poetry slam (open to those under the age of 18) contests should join the Change! Alabaster Facebook group and send a message with name and contact information.