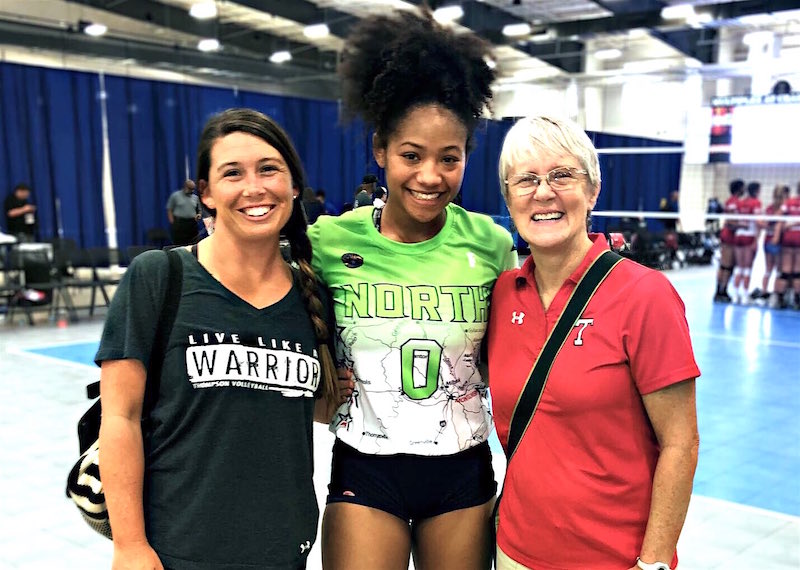 Grace Burgess, left, has been named the new head volleyball coach at Oak Mountain High School after spending time as an assistant at both Spain Park and Thompson. (File)

NORTH SHELBY – Oak Mountain High School has found its next volleyball coach and it’s someone very familiar with the area.

As a 2005 graduate of Homewood High School and having spent the last five years at Thompson and the few years before that at Spain Park, Grace Burgess will now take over as the Eagles’ next head coach.

“Being a head 7A coach is insane and exciting,” Burgess said of the opportunity. “I’m honored they reached out to me and I’m so excited to get started.”

It wasn’t a move Burgess expected to come, but a phone call out of the blue one day changed that.

“I was driving home one day and I do not answer phone calls that I don’t know, but a number popped up on my phone and immediately left a voicemail. It was Tina Mills, their athletic director. Basically she asked if I was interested in the job. I hadn’t sent out my resume and wasn’t looking for a job, but I said ‘absolutely,’” Burgess said. “I went in to meet with them more so to learn what the job details would be.”

But Burgess was quickly asked back for a second interview with school Principal Dr. Kristi Sayers and was offered the job a day after that interview.

Now, she’ll become a head coach for the first time in a county she has spent the last several years coaching 7A schools as an assistant and just down the road from her alma mater.

Burgess will take over a talented Oak Mountain team that finished last year at 23-11 with only four seniors on the team, but a team that is also coming off a 3-0 loss to Thompson in the first round of the area tournament to prevent a strong postseason run.

“We’re excited and they’re confident in themselves and their teammates to get it done,” Burgess said. “That’s not always the case and it will help us be the best we can be come August.”

Burgess had been with the team for two days as of June 16. She said the first order of business is for the team to completely focus on conditioning during the month of June as they inch back into preparing for the upcoming year following a three-month layoff due to COVID-19.

The team is doing conditioning on Mondays and Wednesdays, strength on Tuesdays and Thursdays and then running a mile on Fridays.

“I don’t want them to touch a ball until July because we don’t really know what they’ve been doing,” Burgess said. “I want them to get comfortable and learn my values, then we can get to work on the court.”

Then, starting in July, Burgess is going to shift her focus more to helping the team understand her philosophy and learning what she expects from a competitive standpoint.

“That’s when we’ll do specific position training,” she said. “It will be my hands-on time with them in smaller position groups. That will be impactful for them because it’ll almost be like a private lesson.

“July is where they’ll learn the system we will run in the fall. Every team in our program, from freshman through varsity, and maybe even some at middle school will run the same game plan.”

Burgess said she wants to prepare the team for as many situations as possible on both sides of the ball and challenge them to practice the most difficult situations they can be in during a game.

“Every ball is going to be different, but I’m never going to toss a ball to an outside hitter to just crank one,” she said. “I’m going to throw it to the corner and let a DS pass it then make the outside hitter go across court.”

In addition to being prepared on the court, Burgess has already implemented the hashtag #Edgg for the team’s four core values of effort, discipline, gratitude and growth.

She’s also working on getting to know the team and earning their trust, including an ice cream trip with the team’s seniors to talk about their goals for the program and for life.

“To be successful, they’ll just need to learn what is expected of them,” Burgess said. “They need to take risks and asks questions. I want them to be open and honest with me about their concerns and what they’re confident in.”

In addition to coaching the volleyball team, Burgess will get to continue teaching special education as well, which is something close to her heart.

Her undergrad was in early childhood education, but she quickly grew a passion for her students with disabilities, which led to her getting her master’s degree from the University of Montevallo and transitioning to teach special education at Thompson High School.

Now she plans to get a second master’s degree in counseling to help all students, including those with special needs and any other students who might be struggling with mental health.

“My students make me want to be better every day,” she said. “There is something so special about teaching special education and serving that community. It’s what I care about.”

Since taking the job at Oak Mountain, Burgess said the community has been extremely supportive and she’s excited to give them a program, a coach and a teacher to be proud of.