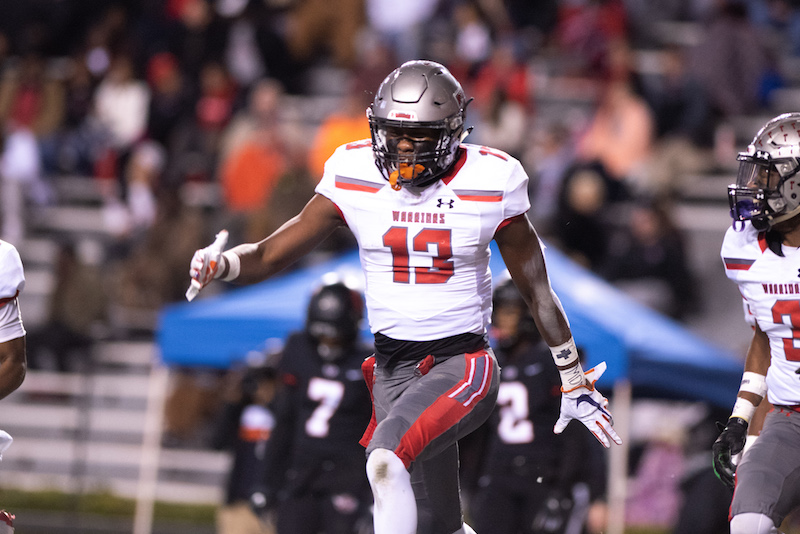 The Thompson Warriors have been ranked 33rd in the country by MaxPreps’ preseason high school football poll. (File)

ALABASTER – While they proved they were the best last year, winning their second state championship in school history and first since 1982, the Thompson Warriors will go into the 2020 football season looking to prove that wasn’t a flash in the pan, but the start to a dynasty.

And at least one national organization thinks highly of the Warriors once again. On Wednesday, June 17, MaxPreps released its preseason high school football poll, ranking the top 100 high school football teams across America—and to no one’s surprise, the Thompson Warriors were the highest ranked team in the state of Alabama.

Ahead of region rivals Hoover and Hewitt-Trussville, Thompson was ranked 33rd in the poll going into the 2020 season.

That recognition continues to mark the success and improvement the team has shown since head coach Mark Freeman took over as the Warriors’ head coach ahead of the 2015 season following a 0-10 performance in 2014.

Since then, Thompson went 5-5 in back-to-back years before really flipping the script in 2017 with a 12-1 record and semifinal appearance.

That sparked a three-year span where the Warriors have now gone 35-4 with trips to the semifinals in all three years, two state championship appearances in a row and a state title last year.

While their region will continue to be one of the most difficult in the country with both Hoover (51) and Hewitt-Trussville (77) ranked as well, the Warriors went from never beating Hoover to winning both matchups last year, the last three matchups in a row and four of the last six.

Hewitt was actually the only blemish on Thompson’s schedule last year with a 35-29 loss, but the Warriors won both the year before.

Heading into the upcoming 2020 season, the Warriors have garnered the high praise not only because of their track record in recent years, but because of what is coming back.

For the second year in a row, Thompson will be replacing an All-State quarterback with Sawyer Pate off to Auburn following one of the best seasons in state history.

Aside from that, the majority of the team returns this season, especially from a recruit standpoint.

On offense, the Warriors will return top running backs Jarrett Crockett and Brandon Franklin as well as two of their top receivers in J.B. Mitchell and Tre Roberson, both of who have several college offers, while South Carolina commit Sam Reynolds will sprinkle in all over the field on both sides of the ball.

Defensively, however, is where the team as stacked thanks to the return of Alabama commit and junior linebacker Jeremiah Alexander as well as sophomores Peter Woods and Tony Mitchell, who both have offers from the top colleges in the country.

In addition to that, the Warriors will return other top playmakers, including Jax Van Zandt, Nate Riddle and several others.

If a quarterback steps up, which right now is presumed to be junior Conner Harrell, then the Warriors will have the experience and talent to be a state championship level team again this year and back up their ranking of No. 33.