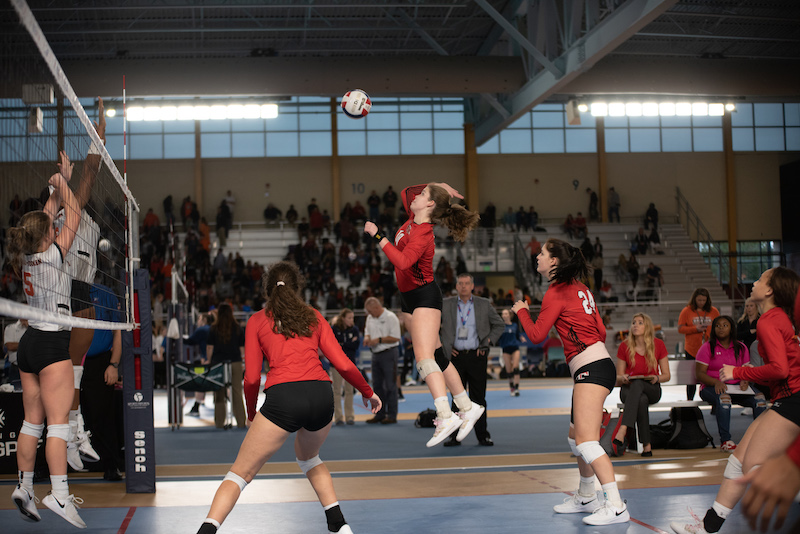 Thompson’s volleyball team recently returned for summer workouts as they gear up to prepare for the 2020 season following last year’s appearance in the state tournament. (File)

ALABASTER – Thompson volleyball had a small taste of the big stage in 2019 and through her first five years with the program Judy Green has seen her Warriors achieve greater heights.

The start to 2020, however, has presented its own unique challenges to sports programs around the country due to COVID-19. But for the Thompson Warriors it’s also provided an extra degree of focus and preparation that wouldn’t have existed in any other scenario.

“I think this whole pandemic thing has brought out the way that we should all focus on our day to day operations,” Green said. “In our program we talk about having a ‘growth mindset’ and staying focused on the process and the journey. I think that has been escalated and this is how you should go about your life.”

Green acknowledged the circumstances made things feel out of control at times, but the veteran coach has learned through life that hard times can make you stronger.

“I think that most coaches have that component in their makeup that they want to control everything. The older I’ve gotten and with the experiences that I’ve had, I think I’ve relinquished control over a lot of those things…and when you don’t have control over how the off-season process has changed you have to grow and adapt,” Green said. “And I think when your players can see their coaches do that it allows them to see the people asking them to do it are modeling what they’re saying.”

The time for extra training was certainly a plus, but Green knows that the new normal also allowed her players to grow closer to not only their teammates, but their coaches as well.

“We had many, many virtual meetings with our teams and I don’t think we skipped a beat when it came to developing the culture we want to have and the love and respect we want to have for one another,” Green said. “I’ve seen that in the gym this past week, it was off the charts.”

Thompson’s coaching staff got creative and found new ways for the team to connect. They had “Facetime Fridays” where the girls would call teammates outside their social circle.

When asked what aspect of the team, outside of their game, improved the most, Green’s answer was immediate.

“The first thing that comes to mind is that they got to know people in the program and people on their team more than they would have if they weren’t stuck in their house,” she said. “We kept trying to force them out of their comfort zone.”

Green admits that while her team learned more about each other, she also learned a great deal more than she thought she would through the process. She visited with every player in her program stretching from middle school to the varsity team meeting with the girls in their yards and driveways.

“I learned about our kids more and I think that’s very helpful when you’re trying to coach someone,” Green said.

The time away also provided Green a unique opportunity as she spent several weeks with her family at the beach.

She was able to run and bike every single day and do so outside of the “hamster wheel” as she calls it where the regular routine would normally make such activities more dutiful and cumbersome.

“I kept getting up earlier so making the transition to getting back into the gym? Piece of cake. I was able to get into that routine and I’ve had several players say how awesome it felt to be in a routine again and have a schedule,” Green said.

This period of growth and connection couldn’t have come at a better time as Green has a special group reuniting for the first time in several years.

“This group is a little bit different—different in a good way—I do believe that they’re closer. And I say that because there has been a core group of players that started together in the seventh grade and they had so much success early on, but once they got to high school that team got split up,” she said. “They are so happy to be back together again, but I also think that our oldest players are really good and effective leaders and communicators. I think we have a good balance with our oldest players at the moment.”

Players have worked out more than they would have otherwise and came back into the gym in what Green described as “incredible shape” improving their strength, athleticism and mental toughness in the off-season.

“I told our staff we were going to be in a really good situation to see who really was committed to the program without the coaches looking over their shoulder, pushing them,” Green said. “We kept up with who recorded their workouts and we had a lot of kids that did it.”

Green said the team will turn their attention to high-level training soon, and she hopes that is a launching pad for success this season.