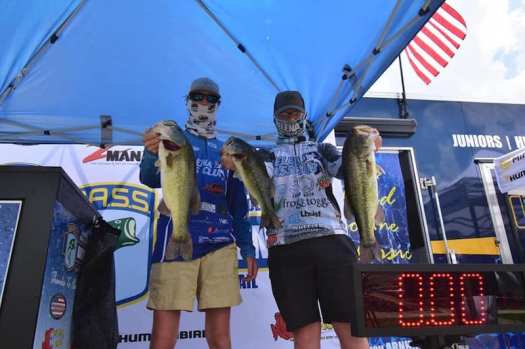 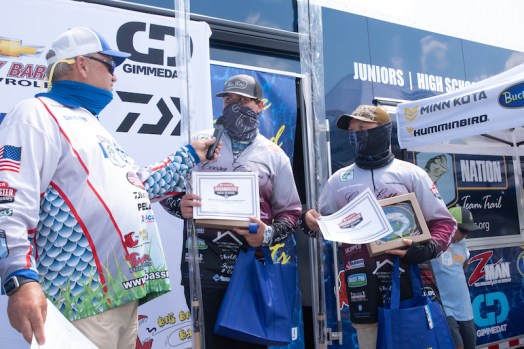 Shelby County students Dawson Bryant and Mason Carden finished in 2nd place at this years event and secured them a spot in the national championship this fall. (Reporter photo/Keith McCoy) 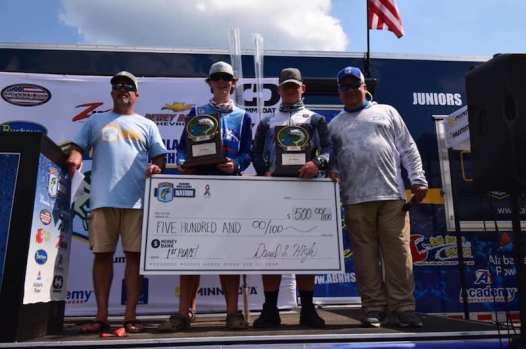 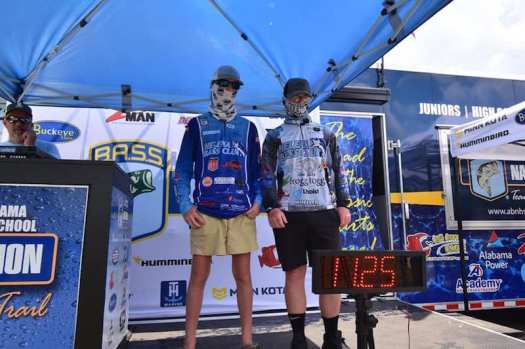 COLUMBIANA – It was a strong weekend for a few anglers who made their way out onto Lay Lake between Friday, June 19, and Saturday, June 20, as one local team brought home a championship and the other qualified for nationals in October.

Carden and Bryant will now get the opportunity to compete in nationals in October of this year, while Berry and Bright will represent at the BASS High School State Championship to be held July 24-25 on Lake Guntersville.

Taking to the lake on Saturday, Berry and Bright brought home a nice bag of fish that weighed in at more than 11 pounds with the official total being 11.25 pounds.

That beat the second-place team from American Christian by a little less than a pound with three total fish weighed. They were one of seven teams to weigh in at more than 10 pounds in a competitive battle between the top 10 teams in a field featuring more than 100 boats.

While they were the only team to finish inside the top 50 from Shelby County, Trey Harless and Connor Gortney also of the Helena Bass Club finished with three fish. Their total weigh in of 5.05 pounds brought them in at 64th.

Not far behind them were more Helena Bass Club members Jax Phelps and Trace Barnett in 67th with a three-fish weigh in total of 4.75 pounds.

Just behind that, other HBC teammates J.C. Sivley and Skyler Stevens finished in 73rd with a three-fish total of 4.64 pounds.

In the junior division on Friday, Carden and Bryant reeled in three fish for a total of 9.97 pounds, which finished behind just less than a pound behind the Lee County duo of Langston Martin and Coleman Mezick.

They were one of four teams to finish between nine and 10 pounds inside the top five.

The next highest finisher was the team of Aiden King and Ethan Hall, who finished 16th with a three-fish total of 6.30 pounds.

The team of Hunter Taylor and Nathan Beane finished inside the top 20 as well and just two spots lower in 18th with a total weigh in of 6.09 pounds.

Ethan Long and C.R. Goodwin added a total of 5.19 pounds with their three fish to claim a top-30 finish of 27th.

Behind that, three other teams finished between 33rd and 36th. Hunter Brown and Eli Holliman reeled in a bag of 4.73 pound, while Clint Pierce brought in a total of 4.70 pounds with his three fish to claim 34th, while Peyton Gardner and Colby Matherson finished with a total of 4.69 pounds to take home 36th.

Brody Parker was the final top-50 finisher for the Shelby County Junior Anglers thanks to claiming the 48th position with 3.91 pounds.

Ethan Edwards and Brody Young also brought in two fish for a total of 2.23 pounds to finish 63rd.