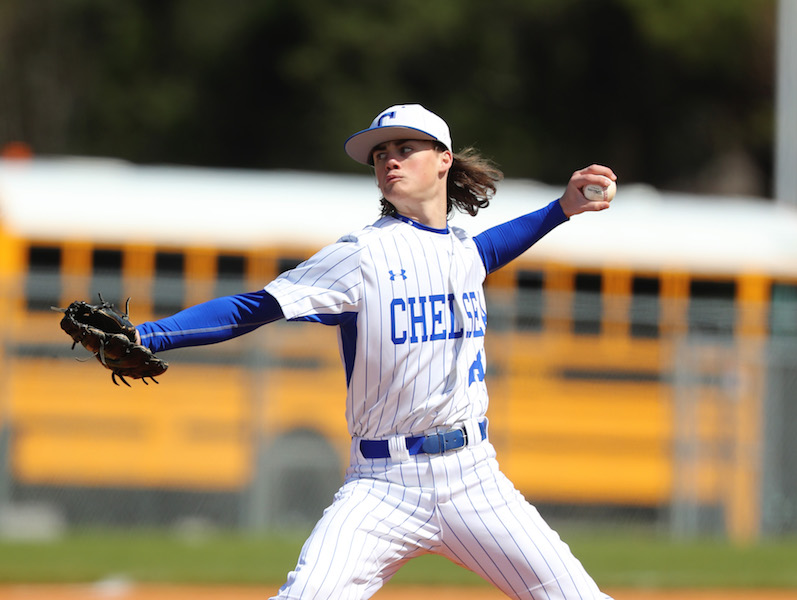 Chelsea pitcher Connor Ball committed to the University of Alabama on Monday, June 22. (For the Reporter/Cari Dean)

While much of his junior season was canceled due to weather and COVID-19, Connor Ball’s talent hasn’t gone unnoticed, largely because of what he accomplished as a sophomore, and now he’s announced his commitment to play collegiately for a top in-state program.

On Monday, June 22, Ball announced via Twitter that he’ll continue to play the game he loves at the University of Alabama where he’ll join head coach Brad Bohannon’s Crimson Tide team.

During the shortened spring season, Ball was able to go 4-1 with 49 strikeouts in just 28.2 innings pitched with a 2.19 ERA.

He was easily on track to follow up his strong sophomore campaign in which he led the county in strikeouts with an impressive junior season.

Ball had a breakout sophomore season as one of the most fiery and competitive players in the county.

Not only did he boast an ERA of 2.12, he posted that county-high total of 107 strikeouts and took his team all the way to the state championship series.

In the playoffs last year, Ball played a huge role in the team’s success as the number one pitcher in each series.

While the team lost in three of his five postseason starts, each loss was by one run. In the first round, the Hornets won 4-0 with Ball pitching six innings and striking out eight.

In the next two series, against two of the top three teams in the state, Chelsea lost the opening game of each series with Ball on the mound by finals of 2-1 against Faith Academy and 8-7 against Russell County.

The Hornets bounced back to win each series, and then Ball went on to lead his team to a 2-0 shutout against Hillcrest-Tuscaloosa in the semifinals, which led to a quick sweep of the Patriots and punched Chelsea’s ticket to the championship series.

In the title series, Ball once again put together a brilliant outing against powerhouse Cullman taking a no-hitter into the seventh inning of the opening game.

The Bearcats, however, went on to win with a walk-off in the bottom of the seventh to take the game 1-0 before going on to win the Class 6A State Championship.

Despite the 2-3 record in the postseason, Ball was extremely close to going 5-0 with three matchups against top-six ranked teams as a sophomore.

With a full junior season, Ball would have had the chance to follow that sophomore campaign up by trying to become the state’s best pitchers.

But even in short work this year, he has done enough in one full season and five starts of another season, as well as travel ball, to earn an offer from Alabama and now be committed to the Crimson Tide.

Ball will once again return next spring for his final year, as he looks to lead the Hornets back to another run at a state championship.