Elvin Hill Elementary School first-grade teacher Lauren Ruston was taught early on, through a figure larger than life, about what it is to take care of others in her community. 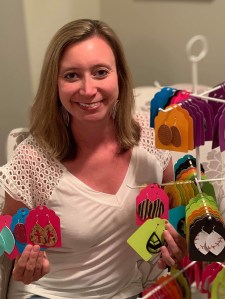 Ruston was raised in Columbiana, where her family has always been active members of Columbiana United Methodist on Main Street. It was there she grew to know a man named George Milton Bird, known to locals as “Skillet.”

“Skillet Bird was the man that the little kids always looked for on Sunday because they knew he had a pocket full of candy to pass out,” said Evan Major, a long-time friend of Bird. “He had a heart for kids, and as long as I’d known him, and he was always doing something to help children in need around Columbiana.”

Ruston was likely one of those who benefitted from that pocketful of candy on Sundays, but she learned far more from Bird than how to score a peppermint at church. Bird, a mail carrier, newspaper columnist, and more was also known for going the extra mile to make sure children had what they needed.

Major told us that each year as the Christmas season approached, Bird would walk up and down Main Street with a steno pad, and collect donations from jars he left at each of the local businesses to raise money for Christmas gifts for children who he worried might not get a Christmas.

Though the methods have changed, the members of the Luther Fowler Sunday School class, to which Bird was a member, have carried on that tradition years beyond his passing in 2002.

Ruston is now a big part of that mission. She coordinates with all three elementary schools in the Columbiana school district to identify families in need during the holidays that the Fowler class provides Christmas for each year.

But this year, of course, has been different. Once churches shut down in March, some of their opportunities to raise funds dried up. By the time summer came along, Ruston found herself immersed in a new hobby that offered her a way to make those losses up.

“I learned to make these fun, lightweight earrings,” she told us. “It really just started out as a hobby and then friends started asking if they could get a pair.” She soon realized that she could use this new hobby to provide a little income for Bird’s ministry, so she set up a Facebook page to sell them called Earrings by Lauren which quickly rose to over 400 members.

The immediate success of her endeavor has encouraged her to take it another step further. She has plans to set up a booth to sell her earrings at Columbiana’s annual Liberty Day celebration which will be held a little later this year on the weekend of July 24 and 25.

To find out more about Lauren Ruston’s earrings check out her aforementioned Facebook page to see the available merchandise. To make a donation to Skillet Bird’s ministry, you can reach out to Ruston through her page or contact the Columbiana United Methodist Church.

Sasha Johns is a community columnist who writes about Columbiana.

By SASHA JOHNS / Community Columnist It all started when two local dads out for a walk with their families... read more