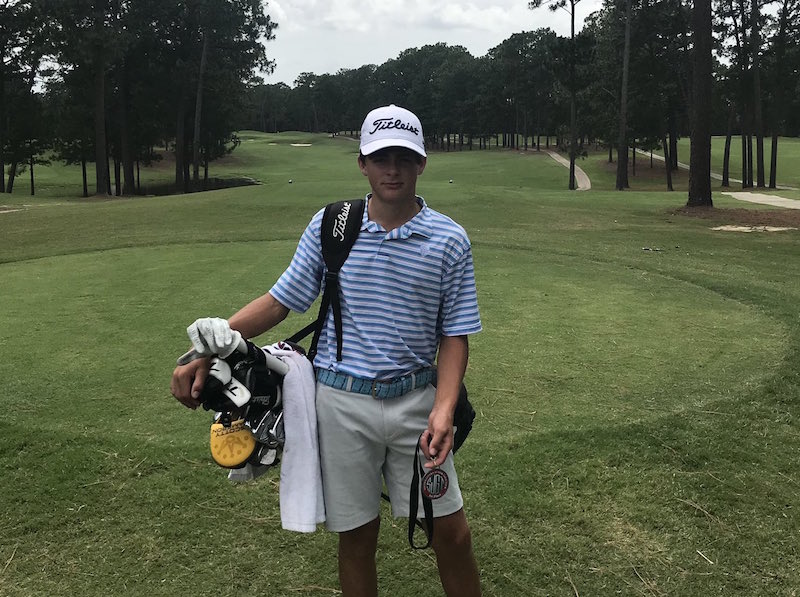 Chase Kyes, a rising eighth grader at Berry Middle School, has won all four of his starts on the SJGT this summer. (Contributed)

HOOVER – After winning the AGA Alabama Boys State Junior Championship 12-13 age division title last summer, Chase Kyes has carried his stellar play on the course into the summer of 2020.

So far, the rising eighth-grader at Berry Middle School has played in four Southeastern Junior Golf Tour tournaments this summer, and he’s won all four of them.

Now, the young golfer is well on his way to another strong summer as one of the top junior golfers in the state.

Still a middle school student competing at the high school level, what Kyes is accomplishing this year may be even more impressive because of the age range.

While all of his wins have come in the 14-15 age division, Kyes has also won two of the tournaments as the best between the ages of 14 and 19 and finished second in the other two in that age range.

That’s showing his talent as a 14-year-old eighth grader going up against some of the top talent from around the country, some of who have three years of high school experience.

Kyes made a statement in his first start of the summer May 19-20 when he traveled to Dothan to take part in the Highland Oaks Junior Classic at Robert Trent Jones Highlands and Marshwood courses.

Kyes put together rounds of 68 and 69 in the tournament to finish at 7-under and take home the 14-15 title by six shots and the 14-19 title by two shots, leading at the end of both rounds in each age division.

A week later, he traveled to Montgomery to participate in the Wynlakes Shootout at Wynlakes Golf and Country Club and put together an even more dominant performance.

He then carried that confidence into a one-day tournament held at the Lake Course in Opelika June 9. While Kyes was unable to win the 14-19 age division, his 1-under 71 was enough for second in that division and first in the 14-15 division. He finished second by two strokes and won by one stroke.

His most recent win closed out a strong month and marked the first out-of-state tournament when he traveled to Hattiesburg, Mississippi for the Hattiesburg Country Club Junior tourney.

In the largest two-day field of the four tournaments, Kyes came out and shot an even-par 72 in the first round, which put him in eighth at the end of the round in the 14-19 age division and second in the 14-15 age division.

But his confidence and poise showed off in round two when he was able to put together a 5-under-par round of 67 to take home the 14-15 title by four shots, while also coming back to finish in a tie for second in the 14-19 age division.

His four wins so far this season gives him the most in the 14-15 age division so far.