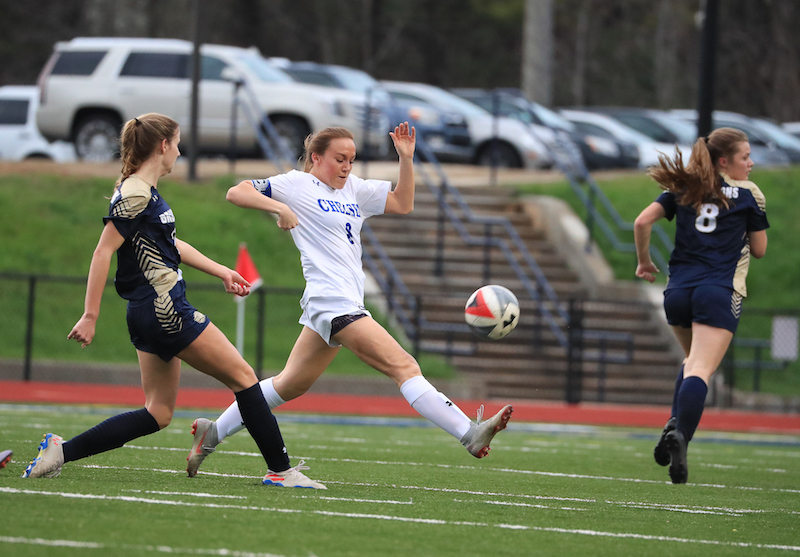 Chelsea’s Kailey Littleford has been named one of the country’s top soccer players from the 2020 season after earning a spot on the United Soccer Coaches’ All-Americna team alongside Oak Mountain’s Ryan Webb. (File)

Two local high soccer players recently received one of the highest honors in the sport following a shortened 2020 fall soccer season in Alabama.

Chelsea’s Kailey Littleford and Oak Mountain’s Ryan Webb were both named to the United Soccer Coaches ‘ High School All-American team with Littleford representing the girls and Webb the boys.

Webb earning the award made him one of the 19 best soccer players in the country during the 2019-20 sports calendar year, while Littleford was one of the 26 best girls.

Littleford’s historic career came to an abrupt end this season on Friday, March 13, due to the COVID-19 outbreak cancelling the rest of the season.

But timing up to that point was on her side. A week earlier on Thursday, March 5, Littleford became the all-time leading scorer for a Chelsea team that has seen some of the state’s best players in the last 10 years.

The former record was held by Britne Holderby, who scored the game-winning goal for Chelsea’s first state championship back in 2012.

After posting 38 goals as a junior, Littleford was well on her way to another spectacular season this year with 11 goals in 10 games as well as six assists.

While she didn’t get to close out her career with an official end, the 86th goal of her career on March 5 will be one of her final and most fond memories.

With Chelsea ranked No. 1 and coming off a state championship loss the year before, she was hoping for redemption this season, but her mark was left nonetheless.

A member of the All-County First Team each of the last two years, Webb has been one of Oak Mountain’s most consistent players. As a defender, he not only solidified the Eagles’ back line, but also sparked a lot of the team’s offensive production in each game.

As a junior, he cleared 15 balls from crossing the goalie line, making him arguably the county’s best defender.

That led into what was a promising senior season in which Webb not only continued his stellar defensive play but posted five goals and two assists offensively before the season was cut short.

In addition to those two standouts named as two of the country’s best, two others were honored alongside them on a more local level.

Thompson’s Mekhi Dimbo and Oak Mountain’s Danielle Retief were both rewarded by being appointed to the United Soccer Coaches’ Spring All-Atlantic Region Team.

Retief was well on her way to being named the county’s Player of the Year this year with a jaw-dropping 29 goals and eight assists half a season for the No. 1-ranked Eagles.

At the time the season was canceled, she had already come close to matching her junior year goal total of 34 goals. The Eagles still had 11 games left during the regular season for Retief to add to that already impressive total of 29 goals this year.

She was named one of the 13 best players in the Atlantic Region, while she and Littleford took up two of the five forward spots on the team.

As for Dimbo, he burst onto the scene during his senior year with the Warriors, and he did so in flashy fashion.

In 14 games, he posted nine shutouts and averaged a save rate of 82 percent, while allowing 0.42 goals per to earn a spot as the top keeper in the Atlantic Region.

He also helped the Warriors get off to one of their best starts in school history as part of a resurgence in the program.