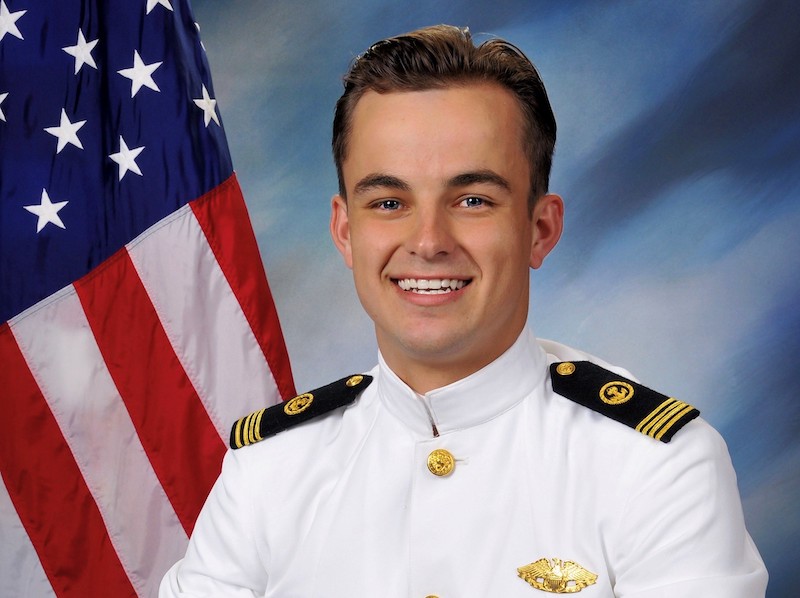 Tanner Joseph Carter of Columbiana recently graduated from the United States Merchant Marine Academy (USMMA) at Kings Point, NY. Carter earned a Bachelor of Science degree and a commission in the U.S. armed forces. He also earned a Merchant Marine officer license, qualifying him to serve as an officer on any ship in the U.S. flag merchant marine.

The United States Merchant Marine Academy is a federal service academy that educates and graduates licensed Merchant Marine officers. In addition to the rigorous academic and physical requirements for admission, applicants must be nominated by their Congressman or Senator.

All USMMA graduates incur an obligation to serve the United States. The U.S. Flag Merchant Marine – manned exclusively by American mariners – is essential for securing the country’s commerce in peacetime and delivering warfighters, weapons, and military supplies in times of conflict. The majority of “Kings Pointers” serve for eight years as Navy reservists in the Strategic Sealift Officer Program while working aboard U.S. flag vessels; others will serve on active duty in our nation’s armed forces.

By virtue of their elite training and real-world experience, graduates are ready to go on day one in service of American military strength and economic power. As part of his four year education, Carter spent one year training as a cadet aboard ocean going vessels.

U.S. Secretary of Transportation Elaine Chao gave the commencement address and told the graduates they “Join a long line of Academy graduates who have served their country with great distinction.”

Despite the COVID-19 pandemic, the Class of 2020 midshipmen returned to USMMA for three weeks in June to prepare for and take their US Coast Guard license exam, four days of tests which midshipmen must pass in order to graduate. This year, the graduation ceremony was held at the War Memorial Monument where the names of the cadets and graduates who died during WWII are remembered.

Superintendent RADM Jack Buono said, “Just as the War Memorial holds 210 names, you are 210 strong…You each carry the name of one of the 210 listed on the War Memorial. By pausing…and rendering a salute in honor of their sacrifices, you honor them and their memory.”

Dedicated during WWII, USMMA has since served the nation in both peace and war. Learn more at WeAreTheUSMMA.com

For more information about the Academy, visit Usmma.edu/.

Shaw up for re-election to Hoover City Council