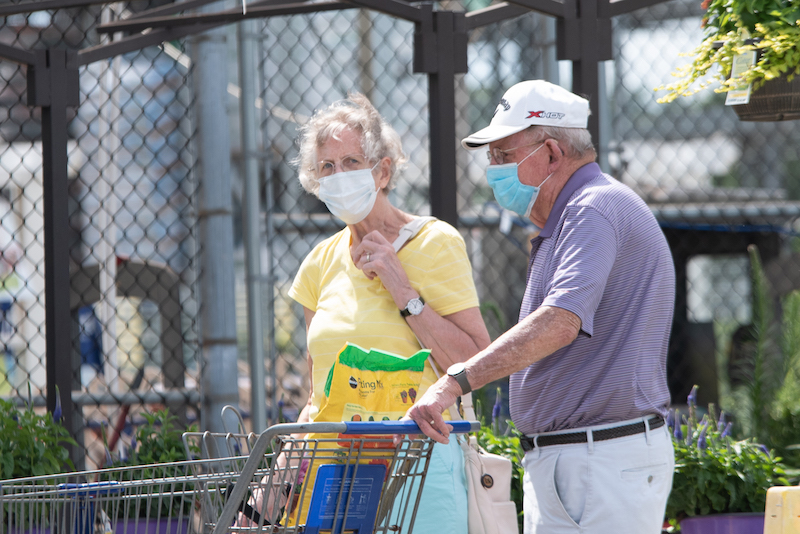 Alabama Gov. Kay Ivey announced a mandated order for all residents statewide to wear masks when in public until the end of the "Safer at Home order" which will expire on July 31 at 5 p.m. (Reporter photo/Keith McCoy)

The order will go into effect on Thursday, July 16, at 5 p.m. and will require everyone across the state to wear a mask until the “Safer at Home Order” expires on July 31.

“I still think this will be a difficult order to enforce and I always prefer personal responsibility over a governing mandate,” she said. “Yet I also know, with all my heart, that the numbers and data over the last few weeks are trending in the wrong direction.”

Wearing a mask will be required when within 6 feet of someone from another household out in public.

Ivey said she won’t restrict anything else right now as far as the economy being open goes, but she also called on the public to do its part to keep that from happening again as numbers go in the wrong direction.

She said the mask order will be difficult to enforce and that the state isn’t asking for police departments to go out and look for it, but she is calling on everyone in the state to do their part in wearing a mask to keep the numbers from continuing to go in the wrong direction.

“The idea is not to have to issue penalties but there is a penalty of $500 and jail time, but that’s not the goal,” Ivey said. “The goal is to demonstrate the importance, the urgency of engaging this public tool that we all have access to which is a face covering. It’s just the smart thing to do as a person, as a citizen, as someone who loves their family and their neighbors.”

The announcement came a day after a new record high with 2,141 new confirmed cases of COVID-19 on Tuesday, July 14. In addition to that, one third of all cases since March 13 have come in the last two weeks and the percentage of positive tests continue to go up.

As of 11 a.m. on Wednesday, July 15, there have been 58,225 confirmed cases of COVID-19 in the state since the virus began close to four months ago, while there are now 1,183 confirmed deaths, which means 98 percent of those with a confirmed case have survived.

Shelby County has been one of the hardest hit counties during the last month and now has had 1,880 confirmed cases since the virus began in the county on March 15.

“Alabama is not headed in the right direction. I believe this mask ordinance is the right thing to do because it will prevent disease transmission,” State Health Officer Dr. Scott Harris said. “We don’t really have a lot of options at this point in time. People ask if the economy needs to slow down and the answer is no, not if people will cooperate with the orders we have in place. Face coverings or masks will prevent the transmission of the disease.”

There are five categories of exceptions for not wearing a mask. The largest category is “practical necessity,” which covers people or situations where mask use is incompatible with the realities of life—for example, children six or younger, people with certain medical conditions or disabilities, eating and drinking, medical and dental procedures and so on.

There are also categories of exceptions for exercise, for communicating with an audience and for certain essential job functions. An additional category carves out narrow exceptions for protected activities like voting and religious worship— but even then, wearing a mask is strongly encouraged.

The order also requires businesses to take reasonable steps, where practicable, to encourage mask use by employees and customers.

One example of a reasonable step from the governor’s order might be to post signs encouraging customers and patrons to wear a mask. Although a business is not required to deny entry to people who are mask-less, they always retain the right to do so—and doing so would certainly be a reasonable step to encourage mask use.

A link to the full order is available here, while you can view frequently asked questions here.