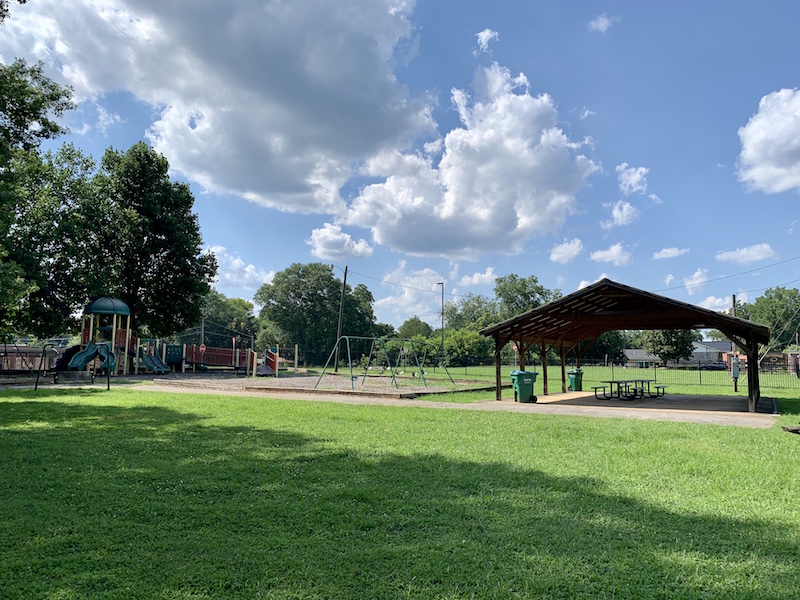 Montevallo city leaders have taken the next step in a project to upgrade George Dailey Park with fully accessible facilities and equipment. (Reporter Photo/Emily Sparacino)

MONTEVALLO – A project intended to make one of the city’s public parks fully accessible is entering the construction phase.

In a July 13 meeting, the Montevallo City Council approved for the mayor to enter into a contract with Kelly Landscaping to prepare the George Dailey Park construction documents on which the bids for the project will be based.

“We’ve been looking over these documents for a while,” Mayor Hollie Cost said, noting the council approved the designs nearly a year ago. “This is going to be exciting. It will be a template, really, for moving forward with other parks in hopes they can all be handicap-accessible one day.”

The park upgrades, which will include ADA-compliant restrooms and playground equipment, are estimated to cost about $200,000, although city leaders will not know for sure until they bid the project.

“Once we know how much we’ll need, we will work on securing the additional funding,” City Clerk and Treasurer Herman Lehman said. “Some of that may come from the MDCD (Montevallo Development Cooperative District), but we’d like to submit a grant to ADECA to cover the bulk of the cost. They were very good about supporting us with our Shoal Creek Park pavilion project.”

Shelby County agreed to help with the restroom installation, which will cost less than working with a private contractor, Cost said.

The city also applied for the AARP Communities Challenge grant for two sets of outdoor exercise equipment for Dailey Park and Orr Park.

“We saw this grant as an opportunity to improve the health of our community beyond our current pandemic,” Sustainability Coordinator Olivia Barone wrote on the city’s grant application. “Rural communities, like us, tend to have fewer available resources for preventive services and access to care and food than urban settings. High rates of poverty and uninsured place rural communities at higher risk for chronic diseases. Thus, community-based preventive measures can help. This project will give all residents the opportunity to use fitness equipment to reduce their risk for chronic diseases and improve healthy habits.”

Grant recipients will be publicly announced on Aug. 20, Barone said.

Dailey Park is named after George Dailey, the first African-American City Council member in Montevallo who is credited for starting the movement for the council to be elected by districts.

The park is situated in front of Montevallo Middle School, which was formerly Prentice High School, the city’s first and only African-American high school from 1950-1970. Dailey was the last principal of the school.

Dailey Park is open from sunrise to sunset and features a pavilion, picnic tables, playground equipment and benches on a roughly 1-acre spread of land.

In other business, the council discussed board appointments before voting on six appointment items individually.

During citizen participation, resident George Henry asked the council how the city keeps track of the board appointments and terms, and to make sure all are recorded correctly.

Cost said the city maintains a spreadsheet of board appointments, and Mayor’s Assistant Maggie Benson coordinates communication regarding the list.

Councilman Rusty Nix asked for clarification about the term expiration dates for two Personnel Board members, Bill Glosson and Bill Lee, which Glosson also questioned in a letter to the mayor and council dated July 12.

“It wasn’t that we were extending their term another three years,” Lehman said. “We were ratifying their reappointment until the end of what would have been their natural term.”

Benson said the process for when a board member’s term is expiring involves the city sending the person a letter asking if he or she is interested in being considered for reappointment to the board.

Nix asked if Glosson and Lee were asked to be reconsidered, and Benson said they were.

In separate votes, the council: