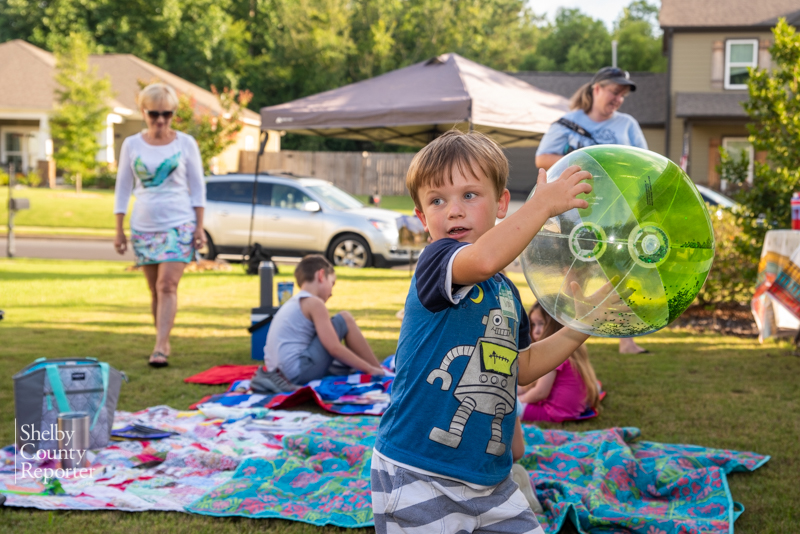 Noah Allums plays games with other children at the First Baptist of Helena's VBS program in the Old Cahaba neighborhood. (Reporter photo/Keith McCoy)

HELENA – This year First Baptist Church Helena took its Vacation Bible School on the road, and visited several neighborhoods throughout the city due to COVID-19 preventing them from hosting a big event at the church.

For the past several weeks, children in Helena have come to different locations to participate in all the fun of games, singing and playing at VBS with the twist of it being mostly outside and in a different neighborhood each time.

The goal of this new approach was to create an environment in each location where children could still have fun in smaller groups where distancing and sanitizing is easier, instead of everybody coming for one big event.

The church wanted to make the event as accessible as possible so they decided to travel to five different locations. This included a kickoff event at their church, then destinations including Amberley Woods, Fieldstone, Old Cahaba and Wyndham neighborhoods.

One of the benefits that the VBS provided for the children is that it allowed those who may not have been able to get out for several months to see their friends and play in a safely structured environment.

“The VBS is typically scheduled for an hour and a half. Since we are not doing the normal VBS, we really don’t have a full amount of stuff to fill the time. So the last part of the event we really have just been letting the kids play,” Champion said. “Kids need to be playing, and their parents need them to play. It’s like a community service to be able to provide guided playtime for them.”

The theme of the VBS has been “Rocky Railway: Jesus Pulls Us Through,” which Champion said was really appropriate, because like a train, they were actually pulling into different stops throughout the town. Champion said that she actually adapted the theme to fit within their traveling idea to maximize the value of the event for the kids.

While most of the events have gone smoothly, due to the nature of the events being held outside, the one struggle the church had to work around was the weather.

The VBS was scheduled to kick-off at Joe Tucker Park on Jun 22, but was moved to the church’s gym due to inclement weather. The last day of the Amberley Woods session also had to be canceled as well due to weather. However, Champion said that despite the rain, the kickoff event was still successful and each week following has been also.

There is only one week left of FBC Helena’s traveling VBS, which will take place in the Wyndham neighborhood July 20-22. The location will be announced on the church’s Facebook page.