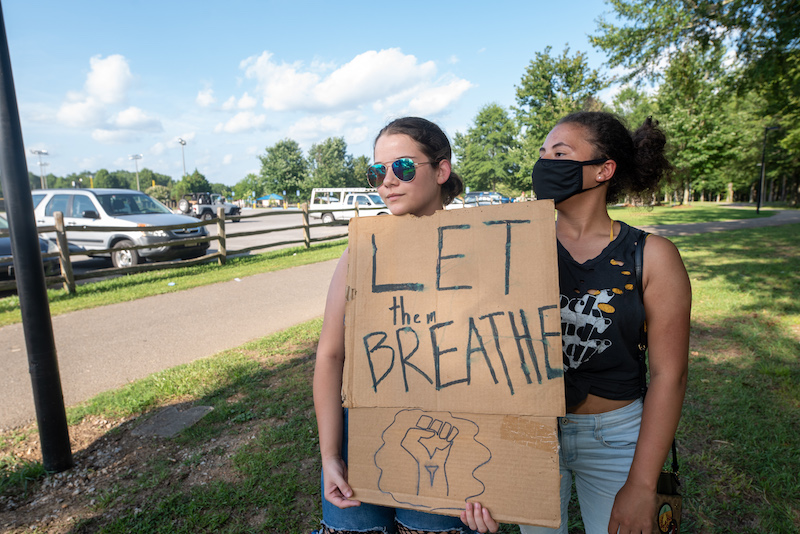 Friday's vigil only had a handful of participants show up and was canceled at Alabaster's Veteran's park, but is just one of many that are aimed at sparking a change. (Reporter photo/Keith McCoy)

ALABASTER – Peaceful protestors gathered at Veteran’s Park on Friday, July 10 to protest societal and racial injustices in the wake of national unrest following the death of George Floyd and others.

The protest was organized by Alabama Rally Against Injustice, which is an activist organization that “hosts rapid response protests and and rallies in response to any societal injustices,” according to their facebook page.

While only a handful of people showed up and the protest was canceled, conversations happened with those who were in attendance and other events have been hosted by the organization.

Celida Soto, Community Organaizer for ARAI, explained that the reason they wanted to hold this vigil in Alabaster was to try and put forth a message to citizens in the wealthiest county in the state that silence sometimes speaks louder than words.

“Silence sometimes speak volumes and also serves to amplify the pain, frustrations and unrest. Sometimes words are not needed, but prescience is,” Soto said. “This weekend was a silent vigil with the objective of addressing how communities of color are treated.”

“We should divest from militarizing the police and invest in on call mental health counselors,” Soto explained. “We also want to address the social determinants of health that cause our black and brown communities to die disproportionately.”

The protest scheduled for Alabaster was one of many to come to bring awareness to these and other issues and to generate interest among locals to join in the cause of the group’s mission of creating equitable structures for everyone.

Despite the unrest seen throughout the last few months Soto is optimistic about the future saying, “I think change is evident. We are not there yet, but I think we will be soon.”

For more information on Alabama Rally Against Injustice visit Facebook.com/alabamarally