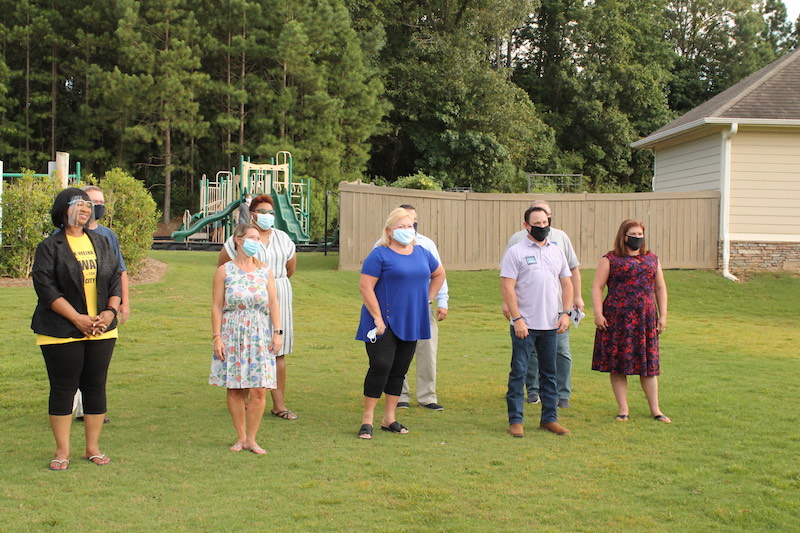 The Hillsboro community in Helena hosted a “Meet the Candidate” event on July 16. (For the Reporter/NathanHowell)

HELENA – City council and mayoral candidates for the city of Helena met with residents of the Hillsboro community for a “Meet the candidate” event on July 16.

The candidates set up booths and answered questions with various residents of the community and the city. They were also given five minutes to speak and make their pitch to residents to earn their votes in the upcoming city elections on Tuesday, Aug. 25.

Many of the candidates discussed issues such as infrastructure, including traffic and school improvements, as well as smart growth for the city.

The two mayoral candidates present at the event were Brian Puckett and Scott Summerlin. Both are seeking to fill the position that current mayor Mark Hall will be leaving at the end of his term.

Puckett, who currently sits on Seat 2 of the Helena City Council, explained that his years of public service to the community qualifies him for the position. He highlighted his time on the PTO board, Soccer Board, the Helena Beautification Board and his time as a city councilor.

He noted making the school resource officer a full time position, updating the city’s website and adding a crosswalk in Old Town Helena as some of his accomplishments and proof of being able to deliver for the city. He said that citizens can trust that they will “have their seat at the table” if he is elected.

Summerlin, who is also seeking to become the city’s next mayor, explained that his 20 years of living in Helena and his 25 years of experience as a police officer and school resource officer gives him the necessary information to address public safety and schools.

“I got into this because I missed public service. It is in my blood to serve the community,” he explained. “I don’t promise anything but to work as hard as I can to move this city forward.”

Candidates for Place 1 include incumbent Leigh Hulsey and her challenger Scot Newman.

Hulsey said that serving on the city council for 12 years has allowed her to establish relationships at the state and county level, and has also given her significant experience and knowledge to perform this job.

If reelected, she wants to focus on fixing traffic issues, making the city walking and cycling friendly, slow down residential and commercial growth, and focus on reviewing all development plans the city has in order to find the best way for Helena to grow.

Newman highlighted his experience running Helena Market Days as well as taking over as President of the Buck Creek Festival as a sign of his dedication to the community.

Newman’s made his pitch to voters by saying “I will listen to the community. We need to act and drive to get things done. I won’t just sit back.”

Candidates seeking to fill Place 2, which is being vacated by Puckett, include Dominga Gardner and Chris VanCleave.

“I am here to make sure that you know I care about our city too. I care about the children in this great city. I care that they have the resources that they need for their school,” Gardner said. “I want them to have recreational facilities, and improve the teacher to student ratio.”

She also highlighted the need to improve traffic and infrastructure, smart residential and commercial growth, diversity awareness and improving relations between public safety officials and residents through a learning management system.

VanCleave’s pitch to the voters also focused on education and growth. He addressed the fact that some Helena students were learning in portable buildings, and that he would lobby the BOE to have additions made to the schools.

He also suggested that the town’s comprehensive plan needs to be reviewed and rewritten so that Helena can grow effectively.

Alice Lobell, the incumbent for Place 3, is currently running unopposed but still wanted to make her pitch to the voters for reelection.

Laura Joseph, the incumbent for Place 4, is also currently running unopposed but addressed her concerns for the town as well as suggestions for improvement.

“We need to ensure that growth is thoughtful and intentional. I intend to continue pursuing state and county officials to improve road infrastructure. As well as contacts at the school boards to improve our schools,” said Joseph.

Tangee Edwards, a lifelong resident of Helena, is also running for city council, however she has not formally announced which place she will seek.

If elected, she promises to use her understanding of marketing and management from her time as the manager of Wells Fargo in Pelham to lead the city with smart and sustainable growth. She wants to improve market value and sustain a high quality of life for years to come.

More information about the upcoming election can be found at CityofHelena.org.