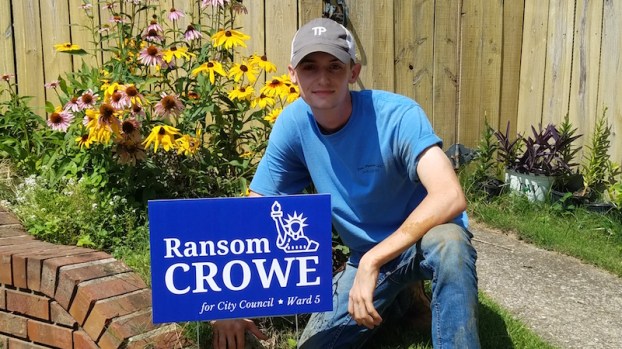 A recent 2018 graduate of Thompson High School, Ransom Crowe hopes to give back to his hometown of Alabaster by running for the position of Ward 5 on the City Council. (Contributed)

ALABASTER – Ransom Crowe has officially announced his bid for a spot on the Alabaster City Council as a candidate for the Ward 5 position during the upcoming Aug. 25 municipal elections.

Crowe is a 2018 graduate of Thompson High School and currently resides in the Kentwood subdivision of Alabaster.  After graduating, he attended Lawson State Community College and received his certificate in plumbing and gas fitting. Now employed by The Plumbers, LLC, he is working as an apprentice.  When he is not working, he enjoys playing soccer and hiking.

Ransom feels strongly about running for office and hopes to make a difference within his community. He believes that there needs to be more blue-collar representation within the city leadership and is a strong supporter of the police and school system.

He hopes to utilize his strong work ethic and unique perspective as a young adult to bring change and help Alabaster to continue moving forward. Alabaster has given him the keys to succeed and he would like to give back to the city where he has lived his entire life.

“What makes me a unique candidate is not only his age, but my completely independent desire to run for the good of the city, without any backing from special interest groups,” Crowe said.

His key campaign points are main street revitalization, the support of small business and the continued growth and renovations to the city’s parks.

“Each of my points has the ultimate goal of bringing in more commerce to the city,” he said. “I firmly believe in the city of Alabaster and ampassionate about helping my community succeed.”