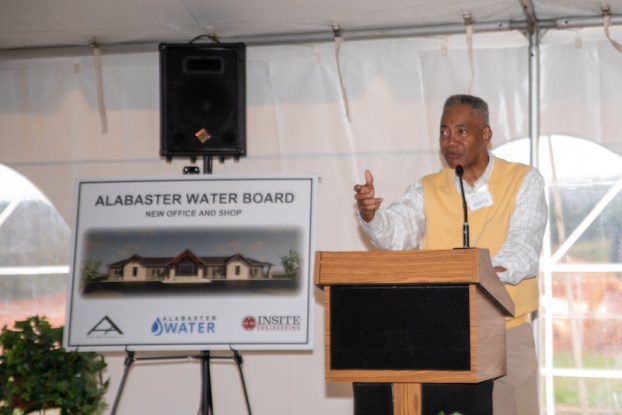 Alabaster resident Bobby Harris, pictured at a groundbreaking ceremony for Alabaster Water’s new facility, was honored with a resolution approved by the Alabaster City Council this month to rename Progress Boulevard to Bobby Harris Boulevard for his service to the city. (File)

ALABASTER – A road that runs through the heart of the city’s Promenade shopping center soon will bear the name of one of the center’s most ardent supporters.

“Bobby Harris has made such a positive difference in our city and our community through his leadership,” said City Councilwoman Sophie Martin, who proposed the idea to the council in February of renaming a city street after Harris. “The mayor and the council were all in support of renaming a street after Bobby. We just thought it was the best way to honor him for his leadership and the positive difference he made in our city, and the difference he has made in other people’s lives.”

The announcement came as a surprise to Harris. He had been asked to attend the council’s first meeting in July under the pretense that the council wanted to recognize multiple former council members for their service.

Harris said he had no clue something else was in the works until he heard his name in Councilwoman Stacy Rakestraw’s invocation, and then again in the resolution.

Harris was first elected to the council in 1992 and served for three terms in Ward 1. He ran for re-election in 2004 but lost by 36 votes, an outcome he attributes to his support of the shopping center’s construction.

“Because it was eminent domain procedure, the people who were displaced were people in my ward,” Harris said. “That left a bad taste in some of my constituents, and I understood that. I knew that was a possibility that I would lose some support.”

But Harris sticks by his past decision to vote in favor of the shopping center as an economic driver for the city.

Fittingly, Progress Boulevard – the road to be renamed Bobby Harris Boulevard – runs through the center of the shopping center, from Alabaster Boulevard to Colonial Promenade Parkway.

“Without Bobby Harris’s leadership, the progress in this city would not have been made to the extent that it has,” Martin said. “Because of Bobby’s leadership and sacrifice, we thought it was just most appropriate to honor him in this way by renaming a street after him and in a location that wouldn’t be there without his leadership on City Council.”

“He’s been a mentor to me through my years on the City Council,” Martin said. “He has been a great sounding board for advice and if I just need somebody to bounce a thought off of. He’s a very good friend of mine, and he’s a good man.”

Harris served as assistant principal at Thompson High School from 1986-1996, and in 1996 was named principal of the School of Technology at Shelby County High School in Columbiana, a role he held until he retired in 2000.

Harris served on the Mildred B. Harrison Regional Library Board of Trustees for nearly 30 years and was a member of the Shelby-Jefferson Literacy Council Board of Directors.

Harris ran for the Shelby County Commission in 2000 but lost to George Dailey, his principal at the former Prentice High School in Montevallo.

Harris was re-elected to the Alabaster City Council that same year.

“The Lord wanted me to be in Alabaster,” Harris said.

Harris was appointed to the Alabaster Water Board in 2011 and has served as chairman since 2016.

He is a long-time member of Mt. Olive Baptist Church and is a Vietnam veteran.

He and his wife, Brenda, have three grown sons and 11 grandchildren.

“Bobby Harris has done so much for the Alabaster community over the years, a lot of it behind the scenes,” said Alabaster Board of Education President Adam Moseley, a former City Council member and a friend of Harris’s. “He has always been an advocate for Alabaster.

“I know Bobby was not expecting something like this, but I think it is wonderful for the city to honor him in this way. He has given so much to Alabaster over the years, and it is fitting that there be a permanent testament to his service.”

HOOVER – A bakery set to open on the U.S. 280 corridor next month is taking the classic cinnamon roll... read more