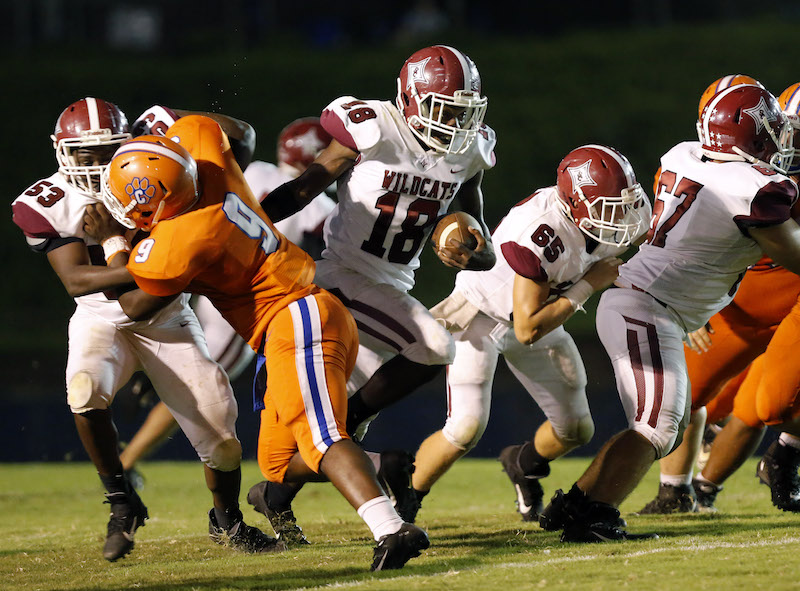 The Shelby County Wildcats will look to tackle a 2020 football schedule that looks full of opportunity. (File)

Coming off a 2019 season in which the Shelby County Wildcats lost four games by nine points or less, the difference in going 7-3 instead of 3-7, the Wildcats now enter the 2020 season with opportunity.

Not only did they win their final three games in a row last year, but they return the majority of their roster this year, including their best players, with a manageable schedule ahead.

Now less than a month from the start of the season, Shelby County isn’t just preparing for that schedule, but hoping to compete for one of the top two spots in the region.

That may seem like a tall task for a team that hasn’t advanced to the postseason since 2009, but it’s plausible this year and it should be the expectation.

Getting off to a fast start will be key for the Wildcats, and starting a week after a lot of teams should help during a time when many haven’t had as much time to prepare due to COVID-19.

That will be the case when the Class 5A Wildcats welcome county rival and Class 4A opponent Montevallo on Thursday, Aug. 27. Last year, the battle of cats and dogs was a see-saw battle that saw the Bulldogs squeak out a 56-50 victory.

That put Shelby County in a quick 0-2 hole to start the season, both of those losses by eight points or less. This year, the Wildcats should have the upper hand in the matchup with Montevallo fielding a talented, but extremely young and inexperienced team under first-year head coach Blake Boren.

All-time, the two teams have met 70 times with the Wildcats holding a 38-31-1 advantage in the series.

Montevallo, however, has won the last two in a row after the series was renewed in 2018 following a 15-year break. The Bulldogs have also won 12 of the last 15 matchups in the series.

Following that rivalry game, Shelby County will hit the road a week later to take on Sipsey Valley during the first week of region play on Friday, Sept. 4.

That should mark a great opportunity for the Wildcats, as Sipsey Valley finished 4-6 in Class 4A last year and will now have to compete up one classification.

Following that road test, Shelby County will return home hoping to be at 2-0 overall and 1-0 in region play heading into a matchup with Selma on Friday, Sept. 11.

The Saints are moving down a classification from Class 6A after going 6-5 in a difficult region last season with a 44-24 playoff loss to Hueytown. The two teams haven’t met since 1923.

That will lead into perhaps the most difficult game on Shelby County’s schedule on Friday, Sept. 18, when the Wildcats travel to Demopolis.

Last season, Demopolis handed Shelby County its worst loss of the season with a final score of 41-7 and went on to finish the season at 7-4 overall. Demopolis has won the last five in a row between the two teams and holds a 7-1 record with Shelby County’s lone win being a 48-42 quadruple-overtime victory in 2006.

A week later, the Wildcats will look for another chance at redemption with a home non-region contest against Chilton County on Friday, Sept. 25. Last season, the Tigers handed Shelby County one of its close losses in a 40-33 game.

Chilton County went on to finish the season 6-5 overall, while the Tigers hold a 43-24-1 record over the Wildcats.

Shelby County will start its October slate of games at home against Central-Tuscaloosa on Oct. 2. Last season, the Wildcats took down the Falcons 28-14, which sparked a three-game win streak to end the season.

If the Wildcats can enter that game with a 2-1 region record, it could again spark a winning streak to close out region play, which could possibly mean a 5-1 region record.

Following that, Shelby County will play its third home game in a row when it welcomes region-foe Marbury to town on Friday, Oct. 9. It marks another game the Wildcats will be looking to get over the hump in after losing last year’s matchup with the Bulldogs 43-34.

That will lead into a bye week, which will be followed by one last region game against rival Jemison on the road on Oct. 23.

After losing two in a row by less than nine points in 2017 and 2018, Shelby County bounced back with a 48-19 win last year over the Panthers, and will hope to start a streak this year to end region play with another key win.

The Wildcats will then close out the regular season with one final road test against, who finished last season 6-5 with a second-round playoff berth. The two teams haven’t met since 2015, but the Wildcats won six of the eight between 2008 and 2015.

Calera will face challenges on 2020 schedule