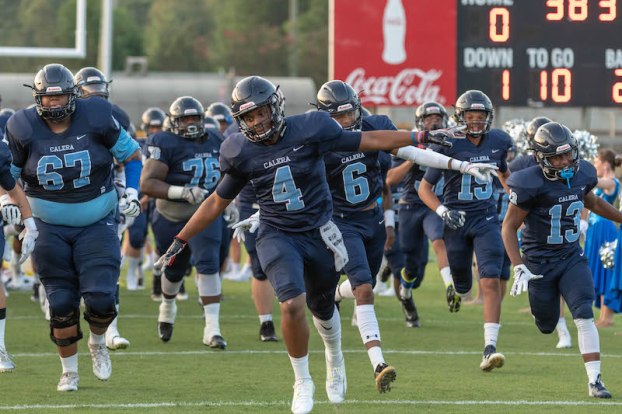 The Calera Eagles will face several difficult tests during their 2020 schedule, but also some evenly matched opponents. (File)

Calera will face challenges on 2020 schedule

There is no hiding Calera’s two wins the last two seasons, but there also isn’t any hiding the desire for the 2020 edition of the Eagles to turn the program in the right direction.

This year’s team is going to be extremely young for the most part, but also has plenty of promise not just this year but in the years to come due to the amount of youth across the board.

But the difficult aspect of this year’s group being successful maybe a year early is going to be the schedule they have to take on in Class 6A, Region 3.

There isn’t one team out of 10 opponents on the schedule that Calera is going to clearly be better than heading into the season because of its difficulty, but that doesn’t mean the Eagles can’t be successful.

That difficult will start week one with a non-region matchup against Demopolis on Friday, Aug. 21. The two teams are renewing a rivalry from when the Eagles were in the same region in Class 5A.

Playing four times between 2014 and 2017, Demopolis won all four games before Calera moved up to Class 6A. Now, the Eagles will look to pick up their first win over the Tigers, who still remain in Class 5A, which would start the season on a high note and show they might already be ahead of schedule.

Calera will play its home opener a week later on Friday, Aug. 28, against 6A foe Jackson-Olin. It will mark the last tune up before region play kicks off a week later.

The Eagles will kick off region play on Friday, Sept. 4, with a home matchup against county foe Pelham.

Following that county rivalry, Calera will take part in its first road region matchup against Chilton County on Friday, Sept. 11. The two teams haven’t played since 2015 when they played four years in a row as Class 5A teams, splitting the four matchups.

Now, both are in 6A, and each will be hoping for a big region win early in the season.

That will lead into a bye week for Calera, before then returning to action with a non-region matchup against Pell City on Friday, Sept. 25.

Both teams will enter this season looking for confidence after the Panthers struggled last year as well with a 2-8 record. If Calera’s youth is progressing, this should mark a good opportunity for a win coming off a bye week.

Calera’s first game during the all-important month of October will take place against Stanhope Elmore on Oct. 2.

The Eagles have fallen to Stanhope each of the last two years by a combined 77-27, while the Mustangs also are coming off a 9-3 season with a second-round playoff appearance.

A three-game home streak for Calera will end with a matchup against another in-county opponent, Helena, on Friday, Oct. 9. The Huskies are coming off their best season in school history last year with a 9-2 overall record.

Helena, like the Eagles, will be a little younger this season, but won last year’s matchup 21-3 to close out the regular season and will be another difficult opponent this season.

Wetumpka will be coming off a 6-6 season. And while that was just a .500 record, it was a season in which the Indians beat Calera 35-7 and advanced to the second round of the postseason.

Benjamin Russell will also be coming off a .500 season after going 5-5 last year, but the Wildcats beat Calera 54-14. That was the point in the season where the Eagles were starting several young players due to injuries, which could help make this year’s matchup more interesting.

The Eagles will then close out the regular season with a third consecutive road matchup, this time traveling to a third in-county opponent in a row when they take on Chelsea on Friday, Oct. 30.

Last season, the Hornets were able to hand Calera one of two shutouts on the season with a 28-0 win, but this year’s Chelsea squad will also feature several new starters.

By the end of the year, both teams should be much more experienced if healthy, which could create for a compelling finale.

By NATHAN HOWELL | Special to the Reporter HELENA – As summer comes to a close many parents and youth... read more