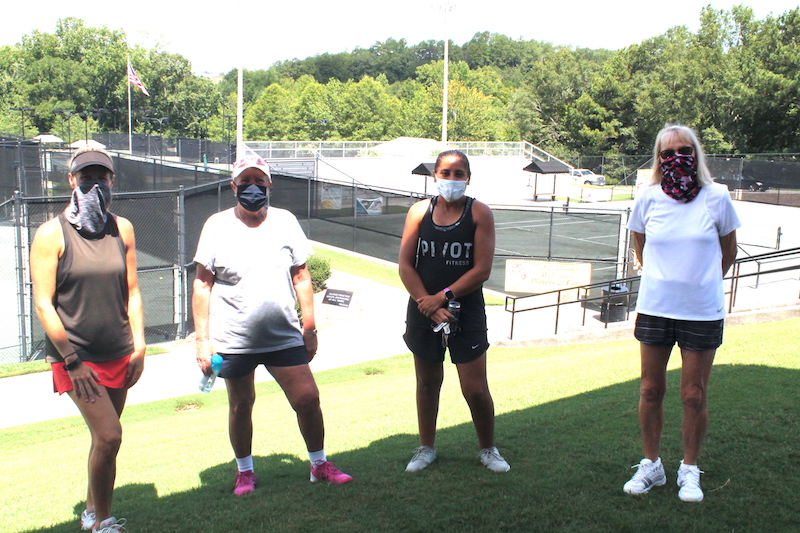 PELHAM – The Pelham Racquet Club celebrated the retirement of its Head Tennis Pro Ann Etheredge with a party on Monday, July 27.

Friends, family and those who have learned under Etheredge gathered at a socially-distanced celebration held outside of the club to honor her contribution not only to their organization, but to the city of Pelham and the sport of tennis. Pelham Mayor Gary Waters was also in attendance to wish her well in her retirement after years of service to the city..

Etheredge greeted all of the guests with sincerity and a smile behind her facemask, and expressed how much she loved doing her job and what it meant to be celebrated in this way.

“I think this is just so special,” she said. “PRC has been so special to me. The club and the people I work with are so phenomenal.”

Etheredge announced her retirement from the club on July 9 and her last day at the club will be Aug. 1.

Her remarkable career spanned more than 20 years after becoming involved in tennis with the city of Pelham in 1999 when she was affiliated with the Pelham Tennis Club. She then moved to the Pelham Racquet Club in 2001 after it was constructed, where she has since taught many people, which was evident by the turnout at her party.

Etheredge said many reasons led her to knowing it was the right time to retire, but added that she would definitely miss being at the club on a daily basis.

“It is hard when you do something you love to do all of these years and then stop, but it is the right time,” she said.

Etheredge’s experience and accomplishments are exceptional. She is a two-time All-American, she won 23 National Championships, achieved a No. 1 ITF World Ranking, and is a member of both the Southern Tennis Hall of Fame and the Alabama Tennis Hall of Fame. Those are just a few of the highlights in addition to passing her passion for tennis along to future stars.

“Being able to teach at such a beautiful club, alongside an amazing staff, has been so special,” Etheredge said. “From teaching lessons to coaching USTA teams, I have met so many wonderful people. I’ve gotten so much joy and gratification from watching them strive to improve their tennis game and accomplish their goals.”