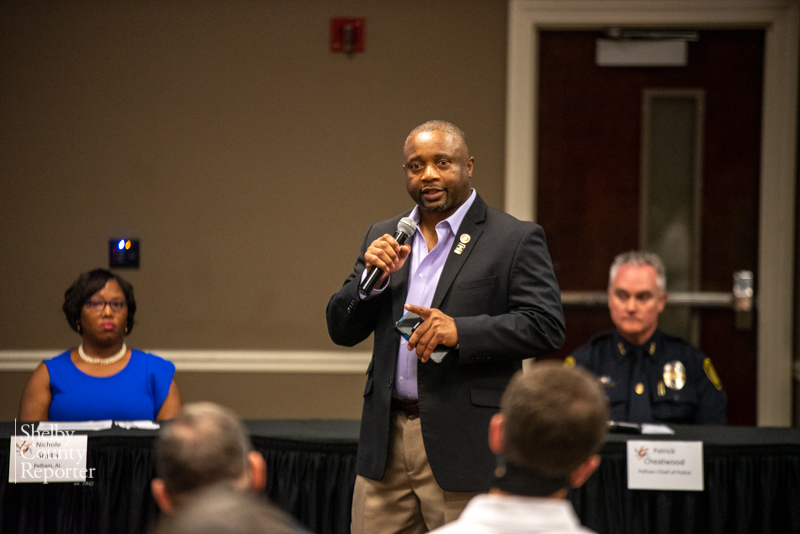 Kenneth Paschal, above, led the second citywide forum in Pelham on helping bridge the gap between minorities and the police. (Reporter photo/Keith McCoy)

The event was organized by Alabama Family Rights Association State President Kenneth Paschal, in association with city leaders, law enforcement officials, religious leaders and community members as a follow up to the first forum, to discuss changes that are already being made and where the city can go to preserve and improve the current relationship among these groups.

“I was talking to some of our leaders and asked them what their thoughts were on how to facilitate a structured conversation in Pelham, and these action items are what we came up with” Paschal said.

The purpose of the forum was to roll out responses and action items created in response to the “Be The Change” survey Paschal promoted prior to both events. The results of the survey say that “traffic stop expectations and the rights of officers and citizens is one of the five most important things,” that can stop deadly encounters and improve relationships between citizens and law enforcement.

There were two panels with the first featuring people of different races and genders explaining how their encounters with discrimination and how their experience with law enforcement shaped their lives. Pelham Police Patrol Captain Doug Setliff also participated in the panel. There was another panel with clergy members to have the same discussion from a religious perspective.

Through the forum, one of the most important items identified on how to limit deadly encounters included expectations of citizens and police officers during a traffic stop. Another suggestion was to “implement hands-on based training opportunities within the community,” with a variety of suggestions on how to do that.