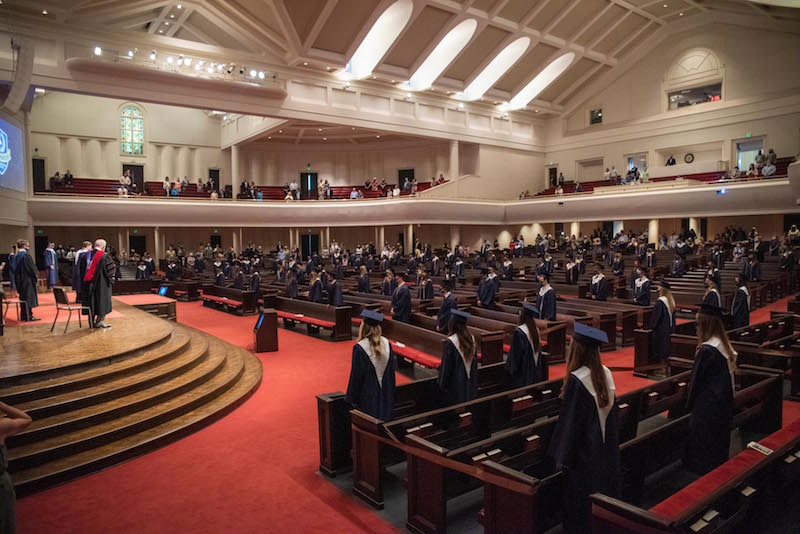 NORTH SHELBY – The members of Briarwood Christian School’s Class of 2020 celebrated their achievements during a long-awaited graduation service held at Briarwood Presbyterian Church on Sunday, July 19.

Four months after their senior year was interrupted and school closed by the COVID-19 pandemic, the students reunited for an in-person, socially distanced ceremony to officially mark the end of their high school careers.

“It is really a special class,” Dr. Shawn Brower, head of the Upper School, said. “In fact, this is a very special day.”

Brower introduced Madeline Simmerman as salutatorian of her class. Simmerman has been a student at Briarwood since she was a 1-year-old in the Mother’s Day Out program. She was a member of Briarwood’s cross country and track teams, including the track team that finished second in the state in 2019. She will be attending the University of Alabama as an Honors College student in the fall and majoring in biology.

“I’m so happy to see our class back together one last time,” Simmerman said to her classmates. “One word that kept coming to my mind about our class is ‘perseverance.’ We as a class have survived an international health crisis, a global pandemic. We have lived through and continue to live through something our parents and grandparents never imagined, and if that doesn’t make us strong, I’m not sure what would.”

Simmerman urged her classmates to look around them at the friends who helped them reach this milestone in their lives.

“As I’m standing here today, having a hard time wrapping my mind around the fact that we’re graduating, wearing masks and also heading to college with so many unknowns still lingering, I remind myself that God’s plan is bigger and better than mine and yours,” Simmerman said. “Even though many of our plans are derailed, we have learned more in the past five months than perhaps the past five years. We have adapted to change in a glorious way. COVID did not mess up our class; it just made us stronger.”

Brower then introduced Christian Ferguson as valedictorian of the 2020 class. Ferguson was a starter for the Briarwood football and baseball teams and a Bryant-Jordan scholarship recipient. He received the University of Alabama Presidential Scholarship and plans to major in engineering.

Ferguson said his life has been defined by the accidental death of his older brother, Sam, in 2007.

“Ironically, my brother’s death has taught me so much about life,” Ferguson said. “We have to cherish our friends and family. Our time together is so fragile; you never know when you say goodbye if it is the last time.

“Although it may not seem like it, your life is short,” he continued. “We don’t have time for comparing, wishing, wanting and waiting for something that’s bigger and better. Seek out what gives you Christ-ordained joy, and chase after your dreams now.”

Ferguson reminded his classmates they still have much learning left to do.

“Cherish the time you have to spend learning,” he said. “Let the lessons learned here at Briarwood and the ones you learn out in the real world push you forward.”

Reeder challenged the students to focus more on what will happen in the next 50 years of their lives than the next five years, and he reminded them of the significance of their actions.

Board hears updates on projects at several Shelby County…