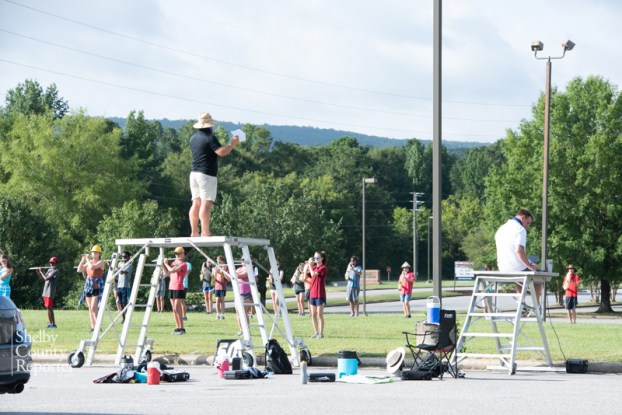 NORTH SHELBY – More than 200 Oak Mountain High School students spent two-and-a-half weeks preparing for the new school year in a tradition that not even COVID-19 could cancel: band camp.

The members of the 2020 OMHS “Spirit of Cahaba” Marching Band reported to the school from July 20-Aug. 5 for socially distanced practices designed to prepare them for upcoming performances, including a halftime show at OMHS football games in the fall.

In addition, students within each group were split up into smaller “cohort” groups of the 10 or fewer people they are nearest to while marching on the field, and all students wore masks when they weren’t playing their instruments.

Although camp was structured differently this year because of the pandemic, Bender said simply being able to see students in person and rehearse together again was fantastic.

“I can’t really aptly describe how happy the students seemed just to see some of their peers and make music together,” he said. “Playing on your own is fine, but making music in a group is really where it becomes exciting for the students. I love teaching music, and having the opportunity to do that again was very refreshing.”

The band will not be able to participate in competitions this fall, but Bender said the Shelby County Band Directors Association is working to find other outlets in which students in band programs can perform, such as livestream concerts.

Bender said participation in the OMHS band is down by about 10 percent because of COVID-19; however, the students who have temporarily dropped out of band plan to re-enroll in the future.

FROM STAFF REPORTS Shelby County Schools will start the 2020-2021 school year in the “Cautious Together” phase of its reopening... read more