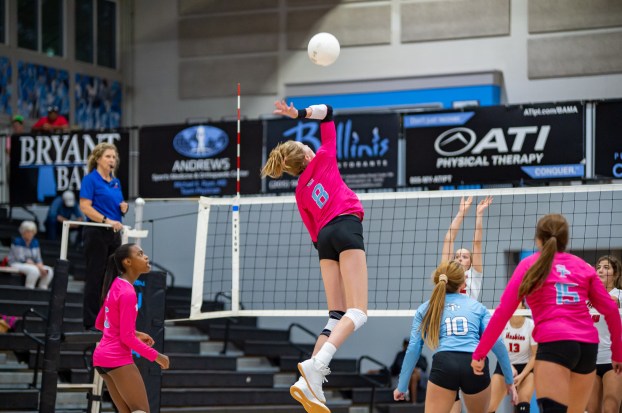 Spain Park’s Audrey Rothman, above, will look to help lead the Jaguars’ volleyball team to a state tournament berth this season. (For the Reporter/Larry Dancy)

HOOVER – Area 6 is up for grabs and Spain Park volleyball knows it. The Big Bad Wolf also known as the Mountain Brook Spartans drops down to Class 6A this year leaving big shoes to fill as the Spartans took the area title five of the six years Class 7A has been in existence.

Spain Park head coach Kellye Bowen knows the opportunity is there for her team and likes what she’s seen in offseason workouts since teams were allowed to practice back in early June.

“I think that the girls have really responded, when we came back the first week in June they were ready to go,” Bowen said. “They had been working out, and I think they responded well through all these circumstances.”

The outbreak of the novel coronavirus threw traditional offseason routines into the fire, but Bowen believes, ultimately, the experience will end up being a positive one for the Jaguars.

“Just trying to keep everyone healthy, in a bubble basically. That’s been the toughest part: how do you work within the parameters of the practices, the 6 feet and the masks. You definitely have to change up how you attack your day of practice,” Bowen said. “It threw everyone for a loop, but I think it was a good loop if that makes sense. We always talk about how you deal with adversity; well this is a great teaching moment for everyone.”

Part of maintaining focus and improving through adversity comes from team leadership. Spain Park landed four seniors on the All-County team back in December, and even though they’ve moved on, the class of 2021 has been taking the reins heading into preseason camp.

“All three seniors did a very good job,” Bowen said. “The stance they took on was: what you do now affects what we do in August. We’ve got to do better, we’ve got to hold a standard and it can’t drop just because we aren’t in school.”

Seniors Katelyn Walsh, Abby Byrd and Bella Pretnar will join junior All-County Second Team member Audrey Rothman to form the core of the Jaguars’ leadership on the court, but the varsity squad is comprised of a nice spread of talent between the classes with five juniors and five sophomores rounding out the rotation.

That balance and depth is something Bowen is always looking to achieve in her program. Good players move on and good players are expected to step up.

“We always talk about getting 1 percent better and building upon last year. It’s never a rebuilding year, we just reload and that’s what we’re trying to do,” she said. “Create that mentality of reloading into your position area, take it day by day and we’ll see where we land come September and October.”

The Jags have a unique chance in an even more unique circumstance when their season opens August 20th and they look ready to pounce on a playoff berth in the fall.

“The Mayor”: DJ Looney remembered by many locally and beyond

By ALEC ETHEREDGE | Managing Editor Entering any room, people’s eyes drew to him, earning him the nickname “The Mayor.”... read more