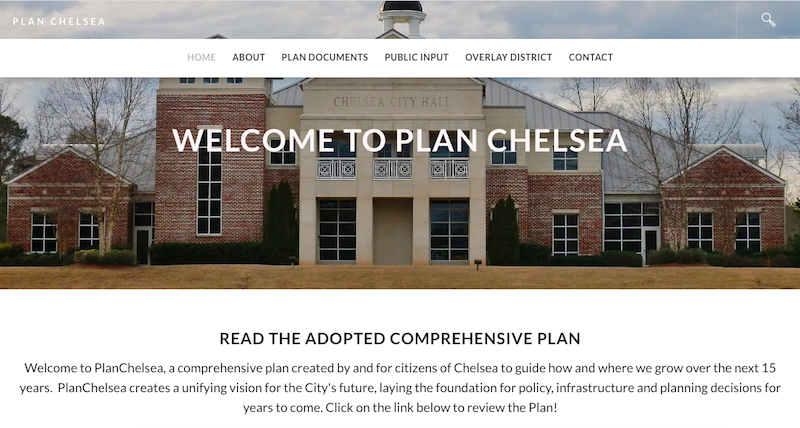 The Chelsea City Council approved resolutions for a new comprehensive plan, which is available for viewing at PlanChelsea.com (pictured in the above screenshot), as well as the upcoming municipal election during an Aug. 4 meeting. (Contributed)

Mayor Tony Picklesimer thanked Regional Planning Commission of Greater Birmingham Community Planner Samuel Parsons for his work in leading the creation of the new plan, as well as the more than 540 residents who shared their input throughout the process.

The 150-page policy document was developed with public input, data analysis and meetings with residents, officials and other stakeholders who served on committees, took surveys and shared ideas during a 12-month period.

Parsons reminded the council that the plan is a guidance document as opposed to a regulatory document; moreover, it is designed to be used as a roadmap by city leaders, developers, business owners and residents as they make decisions about future growth, development, policy and capital improvements over the next 15 years.

“It’s been a fun process to work with you,” Parsons said.

Incumbent Chris Grace and candidate Chris Thomas are running against each other for the Place 3 seat.