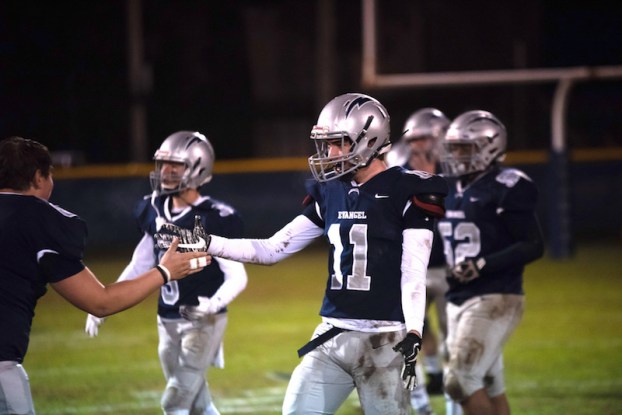 The Evangel Lightning will have to replace a large portion of talent on offense during the 2020 season, but will still be the favorites to win both a state and national championship. (File)

It was no surprise the Evangel Lightning’s dynasty continued during the 2019 football season, taking home their third consecutive state championship in a row under head coach Tim Smith as well as their second straight eight-man National Championship.

Now, with a state title in each of Smith’s season leading the team, the Lightning are expected to repeat that success yet again in 2020.

And while the schedule will feature some of the most difficult eight-man teams in the country, including a rematch of last year’s 92-90 win in the national championship, Evangel is ready to tackle it with several new faces to claim another title.

If this year’s team is going to be successful, it’s going to have to be without two of last year’s best offensive playmakers due to the departure of three-year starting quarterback Tyler Henderson to graduation and athlete Will Ferrell to transfer.

Henderson won all three championships for Smith at the quarterback position and threw for 2,912 yards and 46 touchdowns last year. But more than the production, he was a starting quarterback in the county for four years—playing his freshman season at Kingwood—making his experience irreplaceable this season.

Replacing him this season will be sophomore quarterback Eli Whitfield, who is smaller compared to Henderson with a size of 5-foot-10, 165 pounds.

But Whitfield will allow this year’s offense to take on a different look and be versatile with his speed and athleticism when it comes to running the ball.

Because of his dual-threat ability, the Lightning’s offense may move from pass-heavy to more run-pass option this season, which will make defenses have to respect both in eight-man football. That’s something that can be a difficult task to tackle.

Ferrell will be missed heavily at receiver this season after totaling 1,056 yards last year with 15 touchdowns, but the Lightning are very fortunate to return Jett Lodge to the position.

Lodge totaled 1,214 yards last year with 23 touchdowns. Standing at 6-foot-2, 190 pounds, he’s primed for another monster season in 2020, no matter what the offense looks like.

He’s described as the team’s best athlete and will do just about anything that is needed of him going into this year, which will help fill the void of Ferrell, who played strong minutes at both receiver and running back.

Junior Harris Black and sophomore Tyler Wilson will play at the position as well, and Timothy Howard, a former linebacker, will also bring good hands to receiver this year.

In addition to the loss of Henderson and Ferrell, the Lightning will also lose starting running back Noah Shears. Shears totaled 606 yards on the ground with eight touchdowns to lead Evangel’s rushing attack last year.

But this year, not only will the Lightning take advantage of the legs of Whitfield at quarterback, but Daniel Viles will move from nose guard to running back. He’s possibly the most excited on the team heading into the season because of the opportunity.

Smith says Viles is a talented runner of the ball and his 5-foot-9, 205-pound frame will be dangerous because of his power.

Viles and Whitfield will both get the benefit of possibly the most exciting unit on offense, which comes up front on the line.

This year’s offensive line has plenty of size with every player weighing more than 200 pounds and posing an athletic build.

Zach Chandler, Caleb Lumpkin and Thomas Koach will all start up front, while Carson Donovan, Jared Mourn and Everson Jones will battle for the starting center spot with frames bigger than 6-foot-1, 230 pounds.

Several of those players will also move over to play on the defensive side in the trenches, while Riley Mason and Tyler Jeffers will bring back starting experience at defensive end.

This year’s group of linebackers will be speedy, which should pay dividends in eight-man football. Howard will lead the unit, while Dylan Weathers and Viles will bring physical presences to the position. Aidan Lau, Chris Lee and Colton Dorough will also play key roles.

The secondary will feature the team’s best athletes combined to one position with Harris Black, Lau, Wilson and Whitfield all spending time at defensive back. Garrett Brooks, Caleb Patton and Hayden Black will help solidify that unit at the safety position.

As for special teams, Lodge will handle everything from kicking to the return game.

Evangel 2020 prediction (8-2): The Lightning have won at least eight games in all three years under Smith, including nine in year one. That’s largely been because of their dominance in eight-man football with Smith yet to lose an eight-man game. Most of Evangel’s slip ups come in 11-man action, but this year, the Lightning will play more eight-man games and one of those comes against a team they beat 46-6 last year. The eight-man schedule is difficult and Evangel is replacing a lot of production on offense, which means the potential for a loss or two is there somewhere on the schedule, but by the end of the season, they’ll likely be holding up another ACSC championship trophy and competing for a national title.

By ALEC ETHEREDGE | Managing Editor Now that we are in the month of August, the 2020 football season is... read more