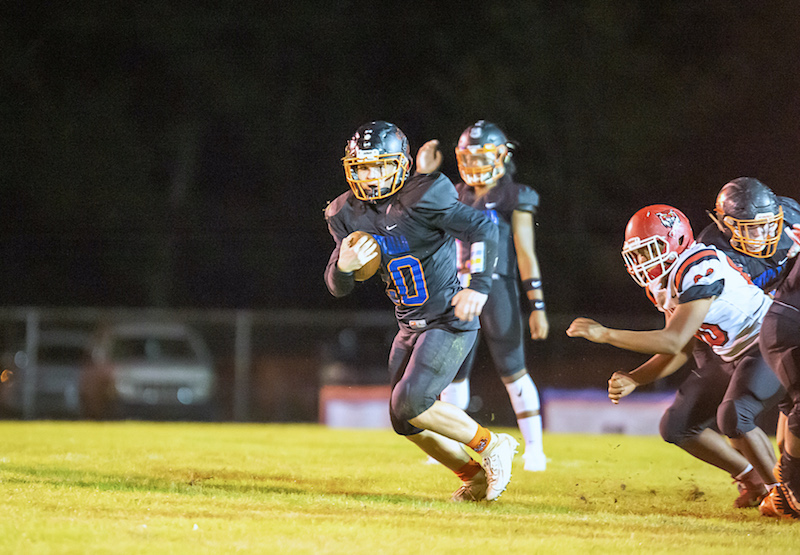 Replacing some of the best offensive talent in the state from the last two years, the Montevallo Bulldogs will have their work cut out for them during the 2020 football season, but there is plenty of optimism from head coach Blake Boren heading into his first season at the helm. (File)

MONTEVALLO – The 2020 football season will mark the start of a new era for the Montevallo Bulldogs with first-year head coach Blake Boren taking over for four-year head coach Brandon Wilcox.

Boren’s work will be cut out for him after Wilcox led the Bulldogs to a 28-16 record the last four years with and the third most points for a coach in his tenure in the school’s history, which dates back to the 1930s.

But Boren is an offensive-minded coach, who will look to form his new team into everything he’s dreamed of as a head coach.

He’s also the son of former head coach Charlie Boren, who led Montevallo from 1998-2002 and led the Bulldogs to a 28-22 record with a 1-1 playoff record. He’ll join his son as the offensive line coach, making his return to MHS.

And while the rest of the coaching staff is also full of experience, this season is going to present its share of challenges.

Now, the Bulldogs and their new head coach will look to replace that offensive talent. And while that may be next to impossible, they remain hopeful with some of the school’s best athletes coming out for the team.

If it’s going to happen, it will start at the quarterback position. Jay Dreyer entered fall practice as the favorite to take over the position, but he’s an inexperienced player, who hasn’t played football in a couple of years.

A baseball player, he has a good arm and brings a good frame of 6-foot-5, 185 pounds to the table. Dreyer is a traditional pocket passer, and he’ll have to form relationships with a new group of receivers.

What will help, however, will be the return of running back Joseph Anderson. With his return, that’s the skill position that will take the lightest hit going into the season.

Anderson showed promise in his time as a backup to Gilliland last year, running for 344 yards and nine touchdowns on 58 carries. Now, he’ll take the reins and looks poised for a big season behind an experienced offensive line.

The receiver position is going to take the biggest hit this year due to the loss of two 1,000-yard receivers, but the Bulldogs seemingly churn out top receivers every few years, and there seems to be excitement building around that streak continuing.

Kial Cottingham will return as a starter to the slot position for his junior season and fits Boren’s run-pass option offense perfectly, while senior Kavounte Britton will be the tallest player at the position and will carry his basketball skills to the football field.

The position will also get help from All-County basketball player Michael Jones. He is a junior that can go strong after the football with good hands and rebounding skills.

The position as a whole will be inexperienced, but the potential is there if they can form relationships with Dreyer and get on the same page throughout the season.

The offensive line will help all of those players make plays this season with the return of Cole Dennis and Hunter Bass. Both have starting experience and will anchor the line, while Will Snuggs and Brantley Burk are also expected to start. Others are battling for that final spot and to add depth.

Dylan Campbell will be a welcome sight to the line after starting every game as a sophomore last year, while Jaylon Hudson will handle a defensive tackle position alongside him. Both stand around 6-foot-3, 270 pounds.

While there is some confidence up front and on the back end of the defense, the linebacker position brings a level of concern going into the season.

The Bulldogs are going to be forced to replace most starters at the position with little depth. Orlandis Weeks and Justin Tyus, two athletes who will also spend time at running back and receiver on offense, have the potential to perform well at the position.

Both normally play in the secondary, but are having to fill a void at linebacker this year and bring great speed and physicality to the table. Beyond those two leaders, there is still a lot of uncertainty surrounding the position.

But what the linebackers lack, the secondary will make up for with KamRon Goins, Cottingham and Javion Prentice set to start this season.

All three return experience, while sophomore Anthony Martin can be an impact player. In addition, Jones and Javon Rogers, two receivers, could help if needed.

Prediction (5-5): A realistic expectation for Montevallo is 5-5, which quite honestly would be an impressive first year for Boren with the amount of talent this team is losing and the lack of football playing experience that will be back. But the schedule will present several opportunities, and it could even see the Bulldogs finish as high as third in the region standings and compete for a playoff spot. After a difficult start to the season, Montevallo will have four consecutive region games that should be winnable. At that point in the season, if they are healthy, the Bulldogs should have gotten through some of their growing pains and have a better understanding for what it will take to be successful. If that happens, they could easily win four in a row and punch a ticket to the postseason. In order to do so, the defense is going to have to take a drastic step forward from the 35.5 points per game it gave up last year, while the offense is going to have to somehow do the impossible and replace four of the state’s best players from last year.