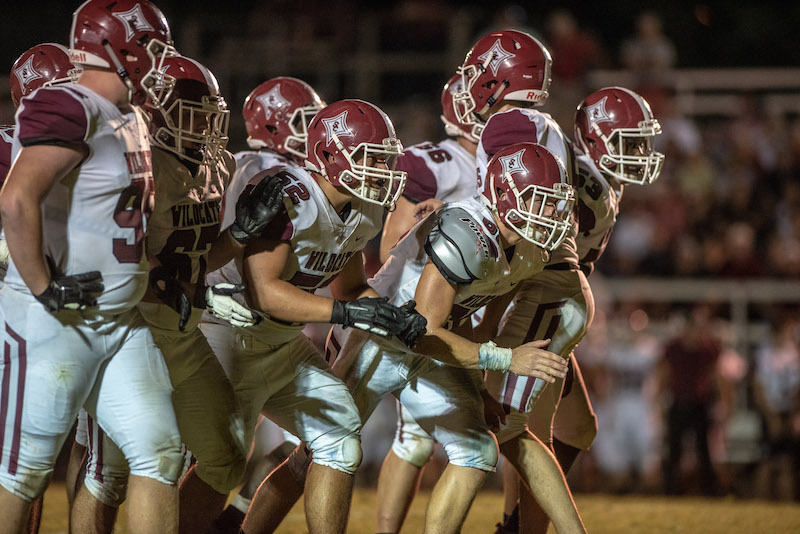 The Shelby County Wildcats have a strong chance to end an 11-season playoff drought this year thanks to an impressive group of returning starters. (File)

COLUMBIANA – A total of 11 seasons have come and gone since the Shelby County Wildcats last made the playoffs. So why is there so much optimism from me going into the 2020 season? Because this is the year they’ll bust down the walls.

Look, there is no hiding Shelby County’s struggles the last several years, winning three games each of the last three seasons. But the last two years, the Wildcats have lost a combined eight games by 10 points or less and have been on the verge of breaking the streak.

What’s the difference this year compared to the last two years? Not only is this year’s team much more talented with the most returning experience they’ve had in several years, but the schedule and region will be much more manageable this season.

Not only that, but the experience lines up perfectly for what Shelby County loves to do under seventh-year head coach Heath Childers, which is to run the football.

At quarterback, Kaden Cardwell and Connor Aderholt have been battling for the starting position throughout the summer and going into fall practice.

Cardwell, however, has the experience factor after taking over for Chase Holliman at times last year when the senior quarterback got injured. He’s an accurate passer and knows how to handle the option-style offense the Wildcats run.

Aderholt has a stronger arm as one of the best pitchers in the county, but is bouncing back from an injury just before last season. Athletically, both are very similar and know how to lead. While Cardwell is the likely starter, they’ll each be on the field somewhere this season because of the difference they’ll make.

Coming off a season in which the Wildcats averaged 31.5 points per game offensively, the quarterback position will be key, but what returns at running back and offensive line is what makes this team truly dangerous going into the 2020 season.

Returning to the running back position will be senior Raheem Montgomery, who returns 773 yards and 13 touchdowns from last year. A physical running back that can run through tackles, he will be a threat every time he touches the ball.

There will also be a second bruising back in the backfield, which will tire out defenses, thanks to the return of Evan Joiner at fullback. Both he and Montgomery are similar in stature and running style.

Then, you can add in the mix one of the team’s best athletes in Tyrese Goodman, who brings a shiftier and faster back to the table. Goodman has confidence back this year after returning from a knee injury last year, and is expected to have a big season.

Running the ball is the Wildcats’ forte each year, but even with all of those talented backs in the backfield, the team can only be as successful as what’s up front. And this year, the offensive line is the most talented it has been in years.

The only big loss will be center Ralph Aderholt, but the rest of the line will be chalk full of experience.

Senior J.T. Pennington, who has 18 Division I offers, will anchor the unit with a frame of 6-foot-4, 295 pounds. Micah Hughes, Kai Barnett and Tanner Stogner all bring at least one year of starting experience to the line, while Ryan Woods and Jackson Bailey will also be leaned on heavily.

It’s a physical and perfectly-sized group of linemen for Shelby County’s scheme, and it’s what should take this team from average to above average.

Each year, the Wildcats also talk about throwing the ball more, and while they did so slightly last year, this year, that should become more of a trend thanks to the return of Isaac Montgomery.

He returns eight touchdown catches from last year and will help make defenses respect the passing game this year, which completes an already dangerous offense.

The defensive side, however, is going to have to show improvement. With the points the offense should put up, the defense doesn’t have to be the best in the state, but it has to be better than the 35 points per game it gave up last year.

It helps that many of the team’s offensive linemen will also play up front on the defensive side, bringing plenty of size and physicality to the position.

Kevin Arteaga, Jack Lobard and Landon Sheffield should have opportunities to step up and make a difference there this year as well.

Perhaps the unit that needs to show the most improvement this season is going to be the linebackers.

Tackling has been the team’s biggest concern the last few years, but the linebackers are a unit that got better near the end of last year and return everyone aside from the inside position.

Montgomery and Joiner, the two physical running backs will take on spots at linebacker this year as well due to their size and strength. Eason Carlisle and Bailey will also both return to the position this year, while Jacob Fox is a sophomore the staff is excited about.

Landon Stewart will also be a returning leader at outside linebacker and coaches want him to be more consistent, while others will contribute.

Backing them up will be last year’s most improved unit—the secondary. It’s a unit that improved drastically in coverage and is still improving in the tackling game.

The unit will benefit from the return of Montgomery and Jaylen Mayfield at cornerback, while Aderholt and Cardwell can both lock down a safety position if need be. Goodman, Greg Brasher and Seth Hall can also add depth on the back end.

Prediction (7-3): Breaking down the schedule, a 7-3 prediction is almost a worst-case scenario going into this season. That’s how much talent the Wildcats bring back and how much more manageable their schedule will be. There is a very real possibility the Wildcats could only lose one game, a matchup with Demopolis early in the season. Beyond that, they should at the very least be in every game on the schedule. This is a team that is built for the playoffs due to the returning talent on offense across the board and a defense that should be improved enough for a winning record.