You don’t want to miss Intermission

It’s often said that those who work hard play hard too. That’s true for the small local band Intermission. Josh Arnold and Barbara Snyder started playing music together in 2013 as an artistic side hustle to their work as educators at Shelby County High School. 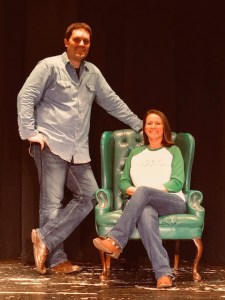 Local duo Intermission, made up of Josh Arnold and Barbara Snyder, grew from what started out as a one-time gig. (Contributed)

It all began when Snyder needed a guitarist for a singing gig she’d been asked to do. Arnold was able to help her out, and since then, the duo has traveled all over the South during their spare time, playing at Farmer’s Markets and Coffee Shops. “Basically when we started, we were just practicing in public,” Arnold told us.

Seven years later, Snyder, now the principal of Shelby County High School, and Arnold, now a lawyer, the two have transitioned from just “practicing in public” with cover tunes, to creating their own music as a further artistic outlet. “About four years in, we just somehow started writing songs during the road trips to and from the gigs we did,” says Snyder.

They began testing out their original material at an open mic event called Moonlight on the Mountain on top of Shades Mountain and were pleased with the reception they got, so they continued to press on.

This July, the duo released their first full album, of completely original music, with the exception of one old-time hymn that closes the album, remastered to a style that fits their brand of sound. The album, called “Skeletons,” is named for the title song that warns the listener, to be careful how they judge others or their own skeletons may just come out and dance for others too.

This song also allowed them to bring yet another educator into their creative process. SCHS art teacher Michelle Branson, who is building her own creative outlet outside of her teaching career, is an artist in her own right. A visual arts artist that has exhibited at Art Walk over the years, had already created a piece of art that worked out perfectly for the album’s cover art. It’s a drawing of two skeletons dancing for a crowd.

It could be said that the underlying theme of the album is empathy, something both artists are reminded of the need for in their high pressured day jobs. Each song tells a story, and the stories, while not always lived out by the songwriters, draws deeply from their Southern roots and upbringings.

Snyder and Arnold also drew from local resources and other artistic talents as much as possible to bring their album into existence. Bassist Todd Brasher and Drummer Erich Cousins played on the record, which was engineered at Full Color Recording Studio by Phil Dudley. “These guys are all immensely talented and are doing some good work in this area and in Columbiana,” Arnold remarked.

To find out more about their album Skeletons, which can be found on iTunes, or to get a copy of the CD in your hand, reach out to Intermission on their Instagram account at the handle intermission.tunes.