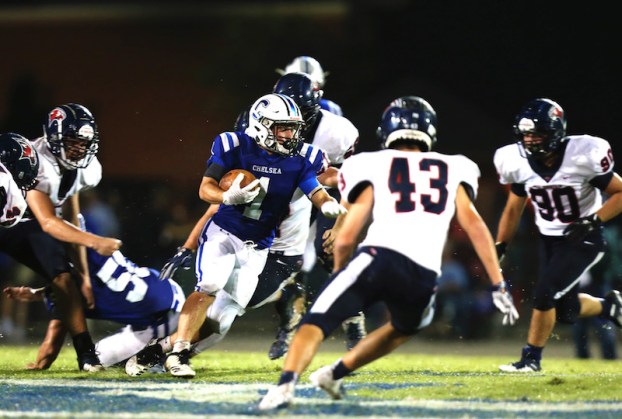 CHELSEA – Last year could have been a much different season for the Chelsea Hornets, but it was also a major step in the right direction under second-year head coach Dustin Goodwin.

Heading into the 2020 season, Chelsea will be coming off a 5-6 season that was extremely close to a 9-1 season. The Hornets were forced to forfeit a 17-14 win to Briarwood and then lost three games in a row by three points or less in the second half of the schedule.

But through that, Chelsea was at one point 4-1 on the season playing Helena for first in the region. While they lost that game 31-28 and went on to lose the next two by a combined three points, the Hornets saw how close they were and don’t want to let that happen again.

It also showed the remarkable strides the team took in just the second year under Goodwin.

This year’s team is going to face its share of challenges with a third starting quarterback in as many years and inexperience across the board at most positions with shortened time to prepare for the season due to COVID-19, but seeing how close they were last year is driving this team to overcome those problems.

At quarterback, Nic Neaves is projected to be the starter this season after serving as Caleb Moore’s backup last year, while Cooper Griffin, the younger brother of former starting quarterback Turner Griffin, is also battling for the spot.

It’s a position that Goodwin needs success from for the team to reach its full potential. The last two years, it’s taken a few games for the new starter to get their feet under them, but the hope is this year’s starter will hit the ground running out of the gate.

Neaves has been in the system for two years, which is key to understanding Goodwin’s philosophy, which should help him be ahead of the previous two starters.

It will also help to see a familiar face in Collier Blair at running back, who returns for his fourth year as a starting back, while the receiving corps will also be one of the strongest units on the team.

Blair returns for his senior season fresh off a 1,048-yard junior campaign with 12 touchdowns, while also adding 187 receiving yards and three touchdowns.

He is by far the most experienced player on the team, and will help lead all of the young players on that side of the ball, especially up front on the line. But, the Hornets will have very little depth behind Blair, meaning he’ll need to stay healthy or someone else will have to step up.

At receiver, Gabe Ruffin and Holton Smith both return as starters, while Adam Reaves also has experience. Ruffin will be a physical downfield target, while Smith and Reaves are a speed threat.

The concern on offense, however, will be the unit blocking for those players.

Last year’s unit was one of the strongest on the team, but this year Chelsea is having to replace all of the starters up front, making it a major concern.

Senior Cody Cooper was the only player the coaching staff had 100-percent confidence in starting going into fall practice, but more are starting to emerge now that pads are on.

The unit will need to come along quickly for the Hornets to take advantage of the rest of the talent on that side of the ball.

Flipping sides of the ball, the defensive line will be a trustworthy position this year. The Hornets return juniors Marquis Turner and Garyson Maddox, who started last season as sophomores. Those two will be the leaders up front, while several young players are exciting the coaches as well.

The most worrisome spot of the defense will come at linebacker with the Hornets forced to replace more than 100 tackles, including 16 for loss and five sacks with the departure of Colby Clements, Cole Berryman and Jordan smith.

Those are big shoes to fill and senior Donovan Bivins is the only player with significant experience returning. He’ll be looked upon to lead the unit, but several others will have to make themselves known throughout fall camp for the defense to be as successful as it needs to be.

In the secondary, Chelsea will make up for any inexperience in the front seven thanks to all of the positions starters returning.

Chandler Pruitt, who will be the leader of the defense, and Carson Freeman will handle the safety position, while Hasani Lyons, Chad Carbonie and Jake Adams will all be lockdown players in coverage.

That unit will help with inexperience at other positions by recognizing where players need to be.

On special teams, Chelsea will lose kicker Cooper Neal, who made 37 of 38 PATs, but punter Sam Niven and long snapper Xander Echols both return for what could produce the best punting group in the state.

Prediction (5-5): There is no hiding Chelsea’s inexperience going into the season with no spring practice. I have faith that the defense can come along, mainly because of the talent in the secondary, but the offense is replacing so much at the two most important positions—quarterback and offensive line. If the offensive line can come along to give Blair the proper running holes and allow the quarterback to have time to make decisions with a solid receiving corps, then this team will be better than 5-5. But the schedule is difficult, and several new faces are going to have to prove themselves for Chelsea to be successful. I wouldn’t doubt Goodwin in making that happen, but the players have to prove it.