“I learned the value of giving back through my family. They placed a strong emphasis on helping others, achieving your highest mental, physical and spiritual potential. We never had a great deal of wealth, yet were so blessed. I want to be a blessing to others,” said Colquitt “Coke” Clark. 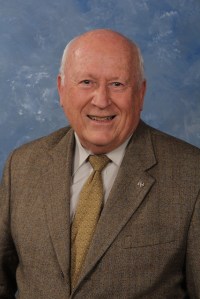 A Nashville, Tennessee native, the 86-year-old has resided in Alabama since 1948 when he was a teenager. He lived in Tuscaloosa until graduating from the University of Alabama in 1955 where he earned a Bachelor of Arts Degree in political science.

Joining in 1973, Clark has been a member of the Kiwanis club for nearly five decades. His tenure began as the District Secretary, the only full-time position which Clark held for three years. “I enjoyed work so much, though I didn’t receive monetary compensation, I got to travel all over the state.  I filled in for an additional year for which I did receive monetary compensation” Coke said.

In 2005 he was elected as Kiwanis Governor over 14 divisions. His position as governor was a component of the board of trustees, which was responsible for officer training for individual clubs, planning and supervising projects and other activities. The organization focuses primarily on youth. One of the projects, Reading is Fundamental, utilizes members that read to Head Start students and donate books. Part of Clark’s role in planning and supervising projects involved him overseeing book distribution to children. “Each child received at least three books. Over 2 million books were distributed over a two-decade period. It was the largest book distribution within the Kiwanis. The state of Alabama was recognized for this achievement,” noted Clark.

Colquitt supports fundraising and service projects at Cumberland Presbyterian Church, which include church bazaars, dinners and disaster response efforts (supplies and delivery to disaster areas). He has been a member for the past 10 years. The congregation sponsors a community assistance program which supplies personal items to veterans every month. Additional community support is provided through the Stand Together Foundation, a philanthropic community that address issues like poverty, education and immigration.

A U.S. Air Force veteran, Coke was a pilot instructor. He taught German students in Munich, Germany for two years. He holds a B.A. in political science and a Master’s Degree in group work and community organization. Clark held a series of administrative positions at several YMCAs throughout the United States. These days Coke has slowed down and spends his days with the love of his life for the past 53 years, Molly. The couple has one grandchild.