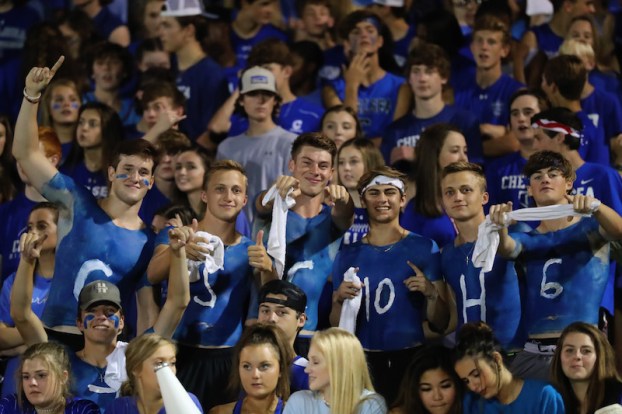 There will be capacity limits at football games across Shelby County this year, while social distancing and masks will be required. (For the Reporter/Cari Dean)

It has become expected that the 2020 high school fall sports season will look like no other due to COVID-19, but school systems across Shelby County are doing their best to make it feel as normal as possible.

Recently, both Briarwood Christian School and the Shelby County School system released their plans for attendance at all upcoming sporting events, and while it will look different, fans will still be in the stands.

For Briarwood Christian School and the Shelby County School system, that means a 50-percent limit in capacity inside all venues this season as well as some other protocols.

Shelby County’s seven high schools will have in place the 50-percent limit on capacity, which includes the band of each home team.

All ticketing is expected to be contactless this year, which also means there is no guarantee you will be able to arrive at the game and purchase tickets.

For that reason, tickets can be purchased online through GoFan.com the Sunday night before each game starting at 6 p.m. It is encouraged that you take advantage of that system quickly each week to guarantee a ticket.

Inside stadiums, it will also be required for those from different households to social distance by at least 6 feet, while also wearing a mask and practicing good sanitation when it comes to washing hands and using hand sanitizer.

Some schools are still offering season ticket options, which would also guarantee you a seat at each home game. You should check with your school to see what options are available.

As for the Briarwood Lions, Athletic Director Jay Mathews talked with several other Ads around the area to make sure BCS had the proper plan in place.

“We configured the max capacity for our stadium that will allow for social distancing,” he said. “We measured out the stands and can normally host around 2,800 people total. We’re going to back off that number to 50 percent.”

Mathews said Briarwood will sell a certain number of tickets to home and visiting fans and when those sell out, the stadium will be considered at capacity.

The Lions, however, are going to move the band from the stands this year to the track area behind one of the end zones in a temporary set of bleachers, which will open up more seats and space in the stands for students and other fans.

Students will also be expected to social distance during games. In all, Briarwood is expected to sell around 900 tickets per game, which includes tickets to opponents and season ticket holders, while the rest of that capacity will be filled by other personnel such as the band, students and priority tickets.

“By reducing our capacity, we’re allowing the opportunity for appropriate distancing,” Mathews said. “Everyone coming into the game will have an electronic ticket and will be required to wear a mask. There will be signs up for everyone reminding them to social distance, sanitize and wear masks.”

Briarwood’s band will still perform its halftime show this year, while visiting bands will not be allowed early in the season, but that could change to pep bands as the season moves along.

As for most schools, the hope will be to stream all contests this fall for those who are unable to make it in person to games.

By ALEC ETHEREDGE | Managing Editor I’m not sure many of us expected to be looking at the first week... read more