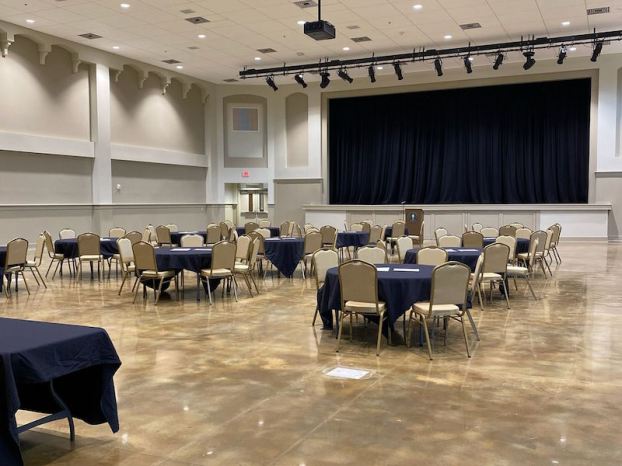 The Shelby County Commission on Aug. 10 approved for the Old Mill Square facility in Columbiana to serve as a courthouse annex during the jury selection process for trials. (File)

COLUMBIANA – A courthouse annex and the Fiscal Year 2021 transportation plan received approval from the Shelby County Commission at its first regular meeting in August.

The Commission voted in favor of the Old Mill Square facility in Columbiana serving as a courthouse annex to allow for social distancing among citizens during the jury selection process.

“We can bring our jury panels in groups of 36, one at a time, into the Grande Hall,” Judge Bill Bostick said, adding the 12 jurors who are selected then will be moved to the courthouse.

When jury trials resume in September, Bostick said further precautions to be taken inside the courtrooms to protect people from COVID-19 include using the galleries exclusively for jurors, who will be distanced from each other.

In addition, a three-camera setup will show the witness stand, the judge and the well, where the lawyers are, in a closed-circuit feed available for defendants, plaintiffs, law enforcement and citizens to view in designated areas.

“When it’s time for jury to deliberate, we will clear the courtroom, and I’ll designate the courtroom itself as the jury room,” Bostick said.

Bostick said he would pay the cleaning and setup fees for the facility out of the presiding judge’s fund.

Commissioner Lindsey Allison and Shelby County Manager Chad Scroggins commended Bostick for his work in implementing safety measures at the courthouse during the pandemic.

“Judge Bostick has done an excellent job of making sure that the safety of those that are in the courthouse is a top priority,” Scroggins said.

The Commission also voted in favor of the county’s transportation plan for the new fiscal year starting Oct. 1.

“In the act that established the new gas and diesel fuel tax, it requires accountability measures, including the County Commission passing the transportation plan showing how these funds will be spent,” Shelby County Engineer Randy Cole said. “This year, we will resurface County Road 47 south from Columbiana to Alabama 145, and across 145 to County Road 71.”

Cole said the project is estimated to cost nearly $2.2 million.

In other business, the Commission approved an Alabama Department of Transportation Cooperative Data Agreement and heard from Scroggins and Chief Financial Officer Cheryl Naugher on the county’s Fiscal Year 2020-21 revenues and current revenue projections.

The county’s sales tax has not declined yet, but a 6-percent decrease is projected.

Lodging tax is 40-percent less compared to July 2019, and rental tax is projected to see a 16-percent decrease.

For the general fund, county leaders anticipate an overall decrease of about 1.57 percent, with less in reserves compared to 2019.