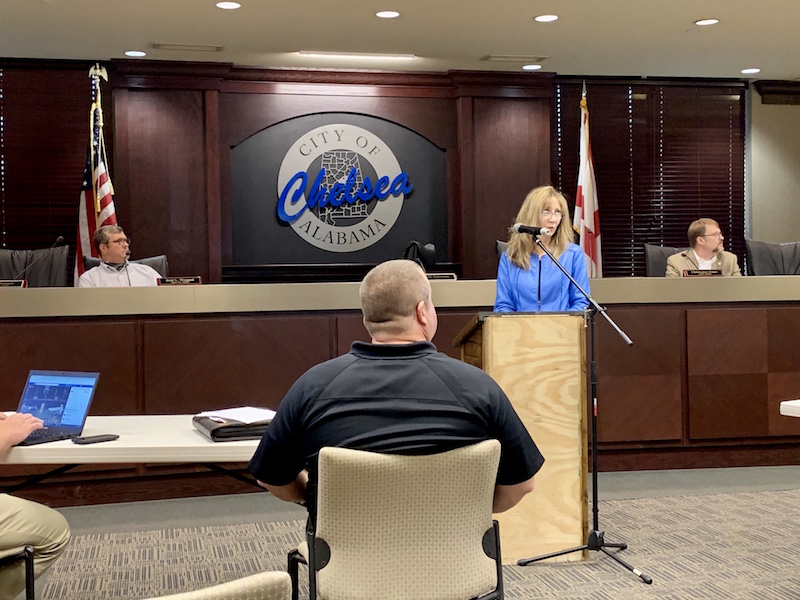 CHELSEA – Residents had an opportunity to ask questions about the potential relocation of Chelsea’s main post office during a public meeting held at City Hall and streamed live on the city’s Facebook page Aug. 18.

Sandra Rybicki, a representative of the United States Postal Service’s Facilities, Real Estate and Assets department in Plano, Texas, provided information and accepted questions from the public regarding a project under evaluation to possibly relocate the post office to a different site.

“The impetus for this project is part of a national effort whereby the Postal Service is continually evaluating our current inventory in an effort to optimize our network,” Rybicki said. “As a result, we’re always looking for ways to reduce cost, consolidate operations and increase efficiencies. Case in point, in Chelsea, Alabama, it is a post office that is severely space deficient to adequately conduct our operation, and there is a real safety hazard due to the overcrowding. This problem is further magnified with the rapid community growth.”

The following are two proposed alternatives to the city’s current post office, which occupies a 1,925-square-foot building on a .75-acre site located at 16738 U.S. 280:

With any retail relocation, Rybicki said the USPS is legally mandated to follow a specific process involving notifying the mayor; notifying city officials and citizens about a public meeting; conducting a 30-day comment/appeal period after the meeting; making a final decision and sending written notification to the mayor; and implementing the final decision.

After the notification process is completed, the project will enter the site selection process in a preferred area within a 1-mile radius of the existing main post office.

Space and parking requirements include a building of about 4,716 square feet on a 1.15-acre site with 30-plus parking spaces.

In response to a question about whether customers will keep the same post office box numbers after the relocation, Rybicki said that is possible the majority of the time.

Another question was related to whether the current post office building is leased or owned by USPS, and Rybicki said it is leased, and in light of the current financial situation, the USPS likely would be looking for another facility to lease.

In response to a question about adequate space at the relocation alternatives, Rybicki said Alternative A presents challenges because the building can only be expanded to an extent and will not meet minimum requirements for future growth.

Another question was related to a timeframe for the relocation to occur. Rybicki said once the 30-day comment period is complete, the evaluation process can begin, followed by site selection, negotiation and a potential buildout, totaling about 8-10 months.

The transition in services from the current location to the new location would be completed in a weekend, causing no disruption for customers, Rybicki said.

Another question was about the new facility including a drive-up drop box for mail, and Rybicki said a box is usually included in new plans.

The 4,700-square-foot facility option is based on a 10-year span of projected growth, Rybicki said.

Rybicki said the post office is a leased facility, meaning the USPS would be paying for the leased portion of that, not for the construction of the facility unless approval to construct a new facility were granted.

The USPS will consider all written comments received at the address within 30 days of the Aug. 18 public meeting.