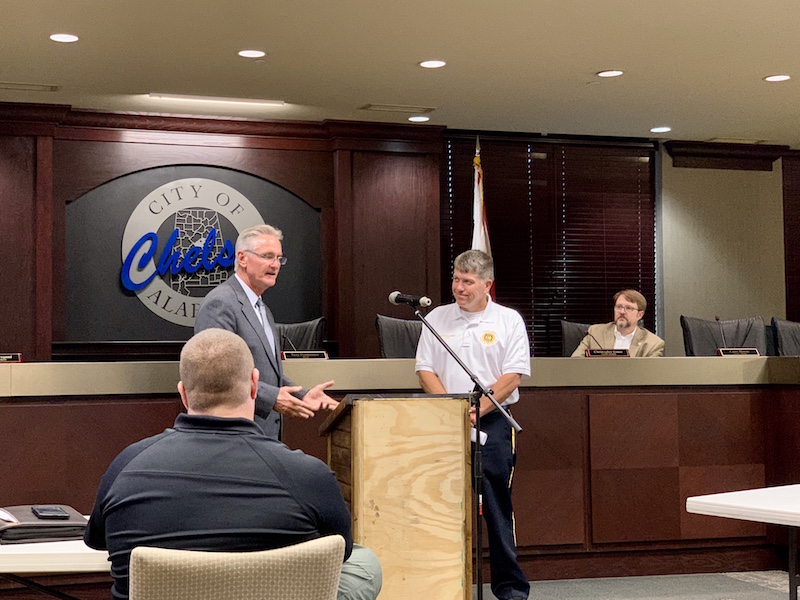 Lee has served as the fire department’s deputy chief since July 7, the day before former Chelsea Fire Chief Wayne Shirley was hospitalized for an infection.

Shirley, the city’s first and only municipal fire chief since 2001, passed away Aug. 6 after battling a chronic health issue.

Mayor Tony Picklesimer praised Lee for immediately assuming his new responsibilities as deputy chief and leading the fire department during what became an extremely difficult time for the community in the wake of Shirley’s death.

“If Joe Lee hadn’t been in the place he was in, I don’t know what we would have done,” Picklesimer said. “Joe has stepped up and done an amazing job in the last 40 or so days. It is our pleasure and privilege to name him our interim fire chief. We thank you for your service and look forward to working with you.”

Lee said he was proud of how the fire department’s staff has pulled together in the wake of Shirley’s death, and thankful to the many first responders in the area who paid tribute to Shirley at his funeral Aug. 15.

“When Chief Shirley offered me the deputy chief job, I was honored and humbled that he thought enough of me to put me in such an important role,” Lee said. “At that time, there’s no way we would have ever known how it was going to turn out, but I believe God has a purpose and a plan for everything. I will do my best to lead by example, and I’ll strive to make sure that we get better every day.”