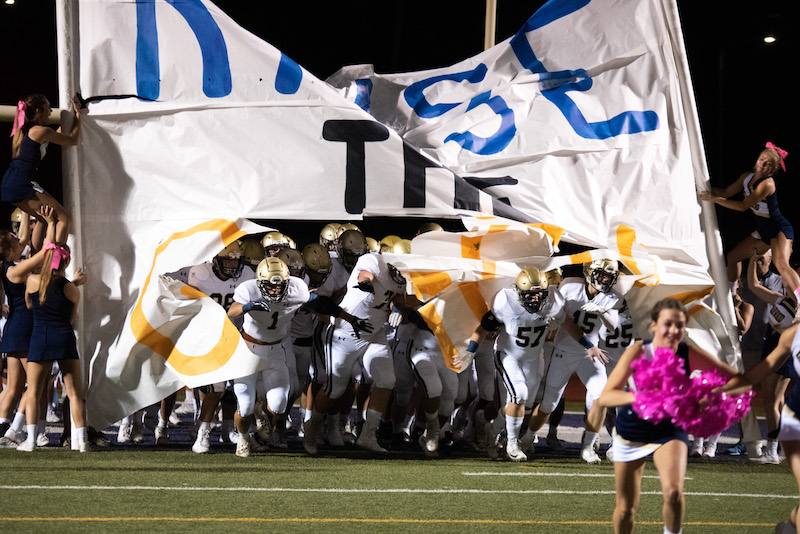 FORT PAYNE – After many weeks of holding their breath just to see if they would even play football this fall, the Briarwood Christian Lions were on even more pins and needles Friday night, Aug. 21, hoping they could hold off the Fort Payne Wildcats to go 1-0.

The Lions started the game with two unanswered touchdowns in the first quarter to take a 14-0 lead early on.

But the Wildcats started to put pressure on the Lions’ defense in the second quarter with a quick touchdown to pull within seven points. Following a fumble from the Lions Fort Payne added a second field goal of the quarter to get even closer at 14-13 Lions.

But as Fort Payne got closer, Briarwood seemed to have an answer all night. Answering the field goal, Luke Reebals went 46 yards to the house to put the Lions up 21-13 going into the half.

The teams traded touchdowns in the second half with Briarwood extending the lead to 28-13 midway through the third quarter on a Riley Margene touchdown run, while Fort Payne finally had another answer late in the fourth on a touchdown run to bring the score to 28-20 with 3:44 left to play.

The Lions attempted to run the clock out from there but were stopped by the Wildcats defense, which left Fort Payne with the ball and three minutes of clock to work with.

The Wildcats drive was nearly stopped at the Lions’ 40-yard line, but a penalty gave the Wildcats new life and spurred another 9-yard gain.

Once the Wildcats got within the 10-yard line, Briarwood’s defense held the goal line for four straight plays to end the game and close out the 28-20 victory.

“The fact that the game was back and forth allowed our boys a chance to step up and play into the fourth quarter,” Briarwood head coach Matthew Forester said after the win.

The journey to the opening week for both teams has been far from ideal, and after a year that has seen so much normalcy be uprooted with no warning, the fact that students got to play high school football game with fans in attendance in the middle of a deadly pandemic was not lost on anyone in Fort Payne tonight.

In fact, Forester remarked how joyous and celebratory the atmosphere was as both teams opened their seasons.

“It was one of the joys of the year to get to play high school sports this fall,” he said.

Now that Week 1 is in the rearview mirror, and the initial feelings of joy over the successful restart and stress over integrating COVID-19 protocols on the field and in the stands subside, the rest of the season awaits. And if Coach Forester immediately asking about how their regional opponents fared on their openers is any indication, he and the Briarwood Christian Lions are more than ready for the games that lie ahead.

“We didn’t do all this preparation for one game, we’re doing this for a season,” he said.

Helena runs through Dallas County to open season with…